0
"By the time I'd met her, Sophie had been staring into the abyss long enough to know that her husband was not coming home."

I was daubing at the big toe of his left foot when I noticed the nail was missing. I rummaged through the sheets and blankets before finding it at the foot of his bed, embedded in the rusted, iodine-soaked gauze of a discarded bandage. The nail was dark grey and brittle, like a scale fallen from some great antediluvian reptile.

He was curious why I’d stopped. “What happened?”

“Your big toe. The nail came off.”

I passed it to him. He stiffened noticeably as he examined it, turning it over and over like a jewel beneath the loupe. Finally, he sighed, sliding open the drawer of his overbed table and carefully depositing the nail within. I caught a brief glimpse of his collection: chips of porous bone, blackened stamps of skin, rufous chunks of shrivelled flesh rolling around like cured meats. “I’m falling to pieces,” he muttered wryly.

I had to agree. Mark suffered from peripheral vascular disease due to poorly-controlled diabetes. The arteries in his arms and legs were obstructed and not pumping blood effectively. His limbs were dying. His right leg had already been amputated above the knee. It wasn’t healing well; the area around the incision line was fiery red and infected, oozing blood-tinged pus. The toes of his left foot clung like withered grapes to a declining vine. The foot itself was leathery and mummified up to the heel, slick and shiny black from creeping necrosis. His right arm was the worst: the thumb, index and middle fingers had all been cut away. The amputation had been ineffective, though, for moist gangrene had set in and travelled up his remaining fingers to mid-forearm. We kept the area sealed beneath layers of gauze, for the odour was horrendous, a foul, rotting, grave-bound stench. It was as though he were being basted by Death.

Sophie had been staring into the abyss long enough to know that her husband was not coming home.

The removal of Mark’s dressings to cleanse his wounds was a ritual we nurses dreaded, for each time we’d discover another small piece of him that had fallen away. A toe. A damp, darkened ribbon of skin dangling from his stump. A crescent-shaped indentation along the side of a finger, as though Cerberus had crept in overnight to nibble away at him. Soggy items would be laid out on a paper towel to dry before he’d add them to the other macabre treasures in his drawer. I often wondered if he were planning to put himself back together at some future date.

Mark’s wife, Sophie, bustled into the room as I was wrapping up his foot. Her oval face and care-worn features were framed by an abundance of silver-threaded auburn curls flowing down her back “because Mark likes it that way”. She was a grizzled veteran of the health care labyrinth. By the time I’d met her, Sophie had been staring into the abyss long enough to know that her husband was not coming home. Now, her only purpose lay in comforting him until the end.

They kissed, and she asked, “Would you like to get up in your wheelchair, honey?”

“I sure would. Then I can chase you around the room.”

She giggled, bringing the wheelchair to his bedside and locking the brakes while I supervised. Sophie had insisted from day one that she alone would get Mark up when she visited. I suspected this was because it was the only opportunity she had to hold her husband in her arms. Unfortunately, her wishes flew in complete opposition to hospital policy. Family members were not allowed to transfer patients due to the risk of accidentally dropping them; both the patient and the person transferring them could be seriously hurt. Sophie fought this prohibition all the way up the chain of command to our nursing supervisor. A compromise was eventually reached: Sophie was shown how to safely transfer her husband, but a staff person always stood nearby, watching closely in case sudden intervention was required.

We needn’t have worried. Sophie was built like a linebacker, with all the corresponding strength. I’d supervised her many times, and her technique was flawless. She’d lift Mark with a mighty huff, then pivot him to the wheelchair, holding him in a close embrace for several seconds before finally lowering him into the chair.

On this occasion, Sophie did something unexpected. She’d lifted and pivoted Mark with her usual ease, balancing him upright as she rested her head against his chest. Suddenly, she took a step forward, then back, then from side to side, rocking him on his one remaining heel. She began to croon, “My love must be a kind of blind love…I can’t see anyone but you…”

Mark beamed. “Our song,” he murmured, closing his eyes. They dipped and shuffled and began to sing together, “I only have eyes for you…”

I was charmed but also concerned, terrified that they were going to stumble and fall. “Ummm…” I stammered, “Don’t you think you should—”

Sophie ignored me. “First song at our wedding,” she said. “Last one, too.” She stared up at her husband with devotion. Then, much to my surprise, she said, “We’re dancing away death, aren’t we, honey?” Mark grinned, burying his cheek in her hair. Sensing his growing fatigue, Sophie finally lowered him to the wheelchair.

Every dressing change, every blood transfusion, every painkiller I administered was a rhythmic movement, a dance I performed to keep Death at bay.

She buckled his seat belt before turning to me, flushed from her exertions. “We danced for hours,” she said, straightening her pants and blouse. “Me in my Rainbow Bridal layaway and him in his shiny black Grafton’s suit. At the end of the night, we tore open a couple of the envelopes we’d been given for wedding gifts. Used the money to bribe the DJ to spin vinyl for another hour. We asked for that song again and again. Didn’t we, honey?”

Mark didn’t need to answer. His eyes said everything. She took his left hand in hers, the only limb that was still unbandaged. “We loved to dance,” she said. “A lotta times, when we couldn’t afford to go out, we’d turn on the radio and dance the night away right there in our living room.”

“’Dancing away death’,” I said. “Interesting expression. I’ve never heard it before. What did you mean when you said that?”

Sophie sputtered, flapping a hand. “Just something that came to mind. Like if the ol’ Grim Reaper sees us dancing, he’ll think we’re fine and leave us alone. Go pester someone else.” As the days passed and Mark’s condition worsened, I thought a lot about what Sophie had said.

Dancing away death. That’s what my job was all about. Every dressing change, every blood transfusion, every painkiller I administered was a rhythmic movement, a dance I performed to keep Death at bay. And in a larger sense, it’s something we all do. Birthdays. Weddings. Anniversaries. Family reunions. These rituals are all celebrations of life, commemorating our vitality, our persistence, our searing devotion to one another.

Even our most mundane activities—going to work, raising our children, emailing distant friends—are all shamanic dances we perform, defiant acts of living that say to Death, You see? Our laughter and our tears and our burning love for one another are mocking you, our passion and our prospering jeer at you! Stand away, Death. Though you are ever-present, you must abide. You must wait. You have no dominion here.

I was helping Sophie gather up Mark’s possessions, stuffing them into a tattered plaid suitcase and a few plastic grocery bags. She’d arranged to have his body transported from the hospital morgue to the funeral home they’d chosen. The gangrene had worsened, forcing the surgeon to take Mark back to the operating room and remove most of his right arm. He couldn’t recover after that, his strength rapidly fading as he drifted off into semi-consciousness.

Sophie stood vigil at his bedside. Towards the end, Mark rallied briefly as the dying often do, repeating the words as Sophie sang him their song in a soft, susurrating whisper. He told her that an angel was beckoning to him. Shortly after that, he fell into a deep, soundless sleep, his breaths barely perceptible. Sophie remained at his side, cradling his head in her lap until his last gossamer sigh.

Sophie opened the drawer of Mark’s overbed table, discovering his macabre collection of body parts. Slivers of bone, strips of blackened skin shining like electrical tape, rusted, rattling pebbles of desiccated flesh. She frowned sourly, appalled. “That is so disgusting. Now, why would he do that?” She placed each of the grisly objects in her palm, examining them closely before discarding them.

“They were his talismans,” I said.
She gave me a quizzical look.
“His good luck charms. A lot of people do that.” I lied.
“Well, there’s only one good luck charm he’d better have waiting for me up there,” she said, pointing to the ceiling.
“What’s that?”
“A size eight pair of dancing shoes.”

She laughed, enfolding me in a suffocating hug. She angled her head upward, and for a moment I thought she was going to kiss my cheek.

Instead, she whispered fiercely in my ear, “We’ll teach the angels how to dance.” 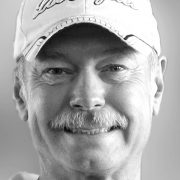 Barry O’Connor
Barry O’Connor is a retired registered nurse with over thirty years’ front-line experience caring for the ill and dying at an acute-care hospital. He is also a published author of nearly a dozen short fiction and non-fiction pieces. He is currently completing an honours degree in sociology at McMaster University in Ontario, Canada.

Your Guide to a Home Burial

Racial Disparities and Discrimination in the Death Care Industry: A Conversation with The Grave Woman