You are walking down an old logging road, surrounded by deep dark forest. The sun is setting and as you turn a corner, you see shapes amongst the trees: tombstones and crosses. What do you do? Well if you are like Mandy and Jeremy from the TalkDeath team, you spend the next hour exploring and taking pictures!

This past summer as we explored the wilderness of British Columbia, we spent a night camping in the ‘ghost-town’ of Coalmont. We heard rumors of an abandoned cemetery in Granite Creek and went out to find it. What we found was a historic cemetery dating to the gold rush era of British Columbia. Yet instead of decrepit monuments in wild overgrowth, the cemetery had repainted iron gates, new markers and detailed genealogical information. This is how we learned of Bob and Diane Sterne, owners of the Mozey-on-Inn in Coalmont.

Although Granite Creek cemetery was officially decommissioned in 2007, Bob and Diane have spent their free time repairing the grounds, clearing brush and collecting genealogical records. Since so little information was kept on record and so many monuments destroyed through time, Bob and Diane have had their work cut out for them. From visiting local and provincial archives, talking to relatives and working with researchers, they have done their best to locate every grave and those interred in them. Lucky for us, Diane Sterne took the time to answer our questions about Granite Creek’s history and future. 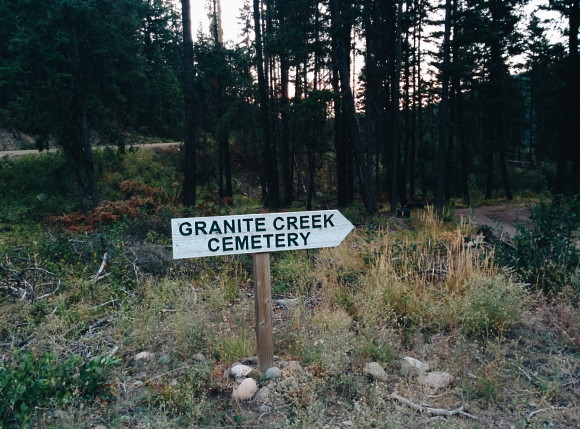 1 – What have been some of the biggest challenges in restoring the cemetery and collecting genealogical information?

The biggest challenge is that caring for the Cemetery can be difficult work and Bob and I aren’t getting any younger. One other local has removed some of the larger trees to use them for firewood and he also repaired Hattie McBride’s grave. We greatly appreciated that help, but there isn’t really anyone else who is interested in caring for the graves or Cemetery. The genealogical information I collect usually comes from family members who stop by here to thank us for the work we have done up there.  Also, much of the information comes from BC Vital Statistics online. 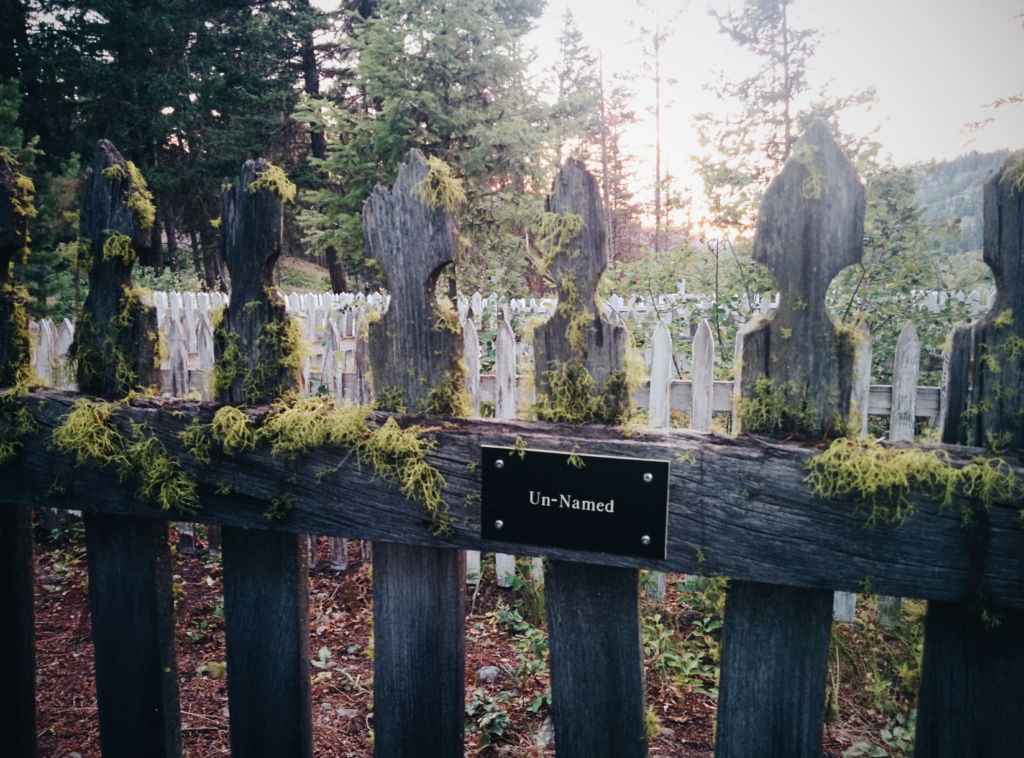 2 – Have you been able to collect much personal information about those interred in the cemetery? And what method do you use?

I don’t have a lot of personal information about those interred at the cemetery. The personal information we collect comes from family members, old newspapers that we have gone through at the Princeton Museum and BC Vital Statistics.  When I find a death notice that I think could be for someone who might be buried at the Granite Creek Cemetery, I will jot it down and we will research it in the Vancouver Library the next time we are there; or one of the members of the Granite Creek Preservation Society will research it in Victoria at the Archives there. The deceased is looked up in the death records on micro-film. If the death records indicate the deceased is buried at Granite Creek, I record it on our board (located on a tree at the Cemetery) with the notation that the location of the grave is unknown.  This tells the visitor that we know that person is interred at the Cemetery, but we don’t know exactly where.

My favorite success story is when a man from the Island contacted me looking for a lost relative of his (Ernest Eplett) from the early to mid 1900’s.  His family had been searching for information on the man for decades without success.  All they knew was that he was last known to be living at Granite Creek.  When he said the man’s name, I instantly knew who he was talking about.  I had read an old newspaper article about the man years before.

Ernest Eplett was burned to death in 1912 when he accidentally knocked over a lamp while sleeping in the Granite Creek jail. He had been using the jail to live in, as it wasn’t being used as a jail at that time. I suspected he was buried at the cemetery but was not sure. The man who contacted me ordered a copy of the Death Certificate and it listed  Granite Creek Cemetery as the place of internment. This was when I realized I could use death records to verify burial locations. The man who had contacted me about the deceased prospector was thrilled to finally learn the fate of his family member and he spread the word to other family members in England.  He has since become a good friend of mine through emails.

After Bob and I have passed away, there won’t be anyone to look after the Cemetery and it will fall into disrepair as it was before we began looking after it.

3 – What motivated you to take on such a monumental task?

I became interested in old cemeteries as a child when my Dad and I used to explore them in Ontario. My Dad used to say his dream was to buy an old Church, fix it up as a cabin, and then look after the adjoining Cemetery.  He never fulfilled that dream. When Bob and I purchased our place in Coalmont and I realized there was a Cemetery up the mountain, I told him I wanted to look after it. It was in terrible condition back then and there were no proper records of the deceased buried there.  So many trees were blown down, it was difficult to even see there was a Cemetery there. We began by clearing out one tree at a time and  we’ve been looking after things ever since. It is very rewarding to respect those who have gone before us and who have no 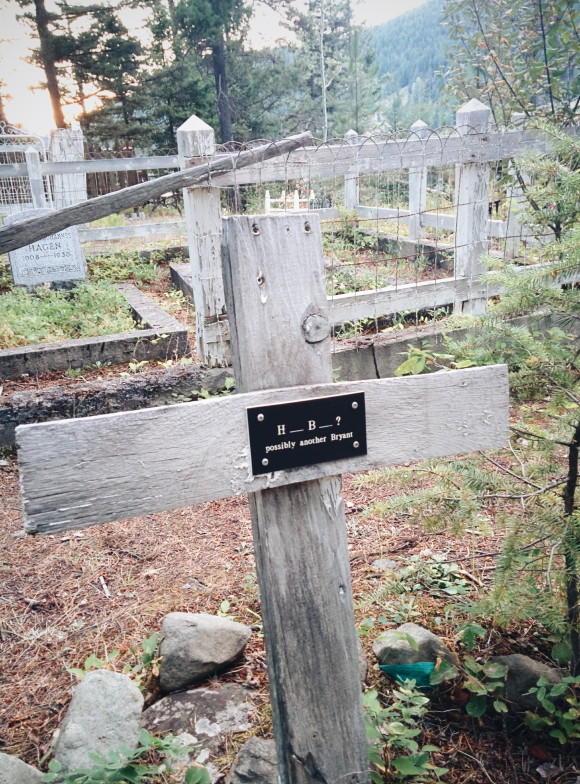 family members to look after their graves.

I began cleaning headstones after we were contacted by the Commonwealth War Graves Commission Canada about a veteran’s grave at the cemetery. He asked us to send a photo of the headstone. It was in terrible condition.  He asked if we might be able to clean the headstone. I explained I would gladly do this, but I didn’t know how to go about it so he gave me instructions. I successfully cleaned it and was so pleased, I decided to carry on and clean all the graves that were in poor condition.

We have had problems with people using metal detectors and digging in the graves.

4 – What is the biggest threat facing the Granite Creek Cemetery?

I don’t think the Granite Creek Cemetery is particularly threatened by anything too serious other then possibly a forest fire. We have had problems with people using metal detectors and digging in the graves. Signage that was put up has been destroyed twice (it seems to be staying put lately though). Now that the Cemetery is recognized as an historic site, it is better protected and, should we catch anyone in the act of vandalizing the site, we can now prosecute. I suppose after Bob and I have passed away, there won’t be anyone to look after the Cemetery and it will fall into disrepair as it was before we began looking after it.

5 – Are there any efforts being made to digitize the genealogical information?

The information I have regarding the Granite Creek Cemetery is kept on our computers here as well as printed out in a binder we keep here.  I have also provided an identical binder (and a CD) to the Princeton Museum for their records.  Records of the graves (together with photographs) are recorded online at the Canadian Gravemarker Gallery. *There is no cellular reception in Coalmont and little internet access. 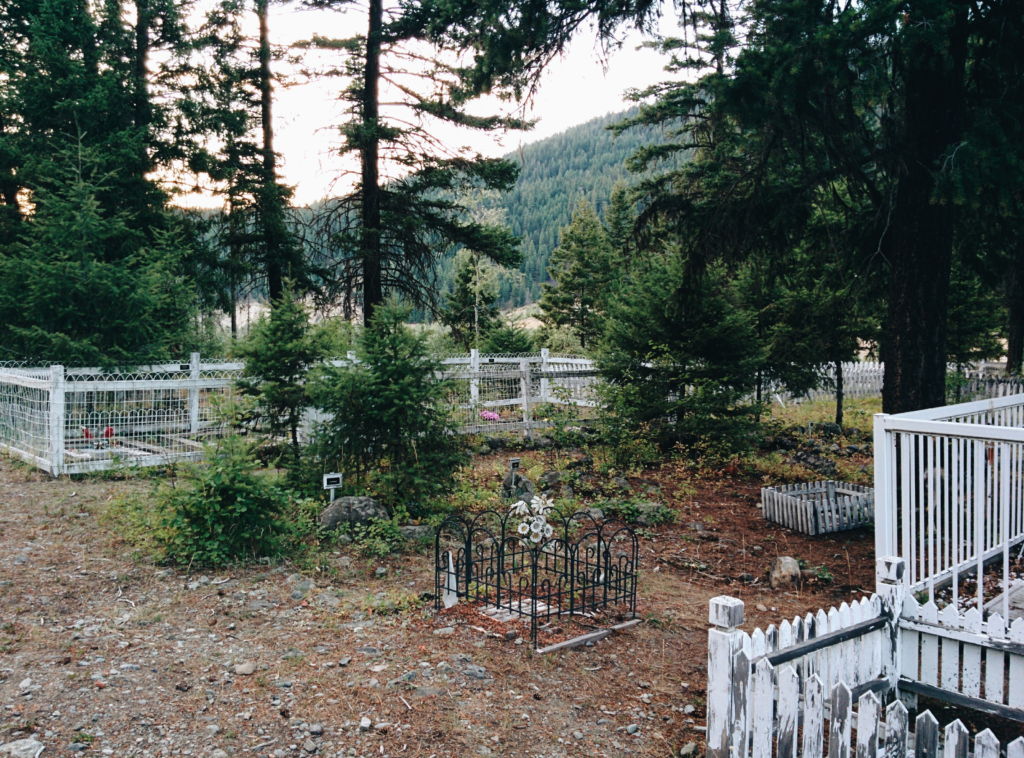 With the gold rush in Canada and railroad building projects, many Chinese laborers came to British Columbia. Many died and were then buried in Canadian cemeteries, including Granite Creek. If possible their bodies were often returned to China after several years.

5 – Chinese bodies were disinterred to be sent back to China but disappeared along the way. What do you think happened?

There is a very interesting video of Chinese bones that were exhumed in British Columbia to be sent back to China. You can view it here. While there is no mention of the Granite Creek Cemetery bones in the video, the University of Victoria holds extensive, detailed records of bones that were sent back to China. I have been in contact with them, and they do not have any records for the Granite Creek Cemetery. We also asked them to search other possible names: Coalmont Cemetery or Blakeburn Cemetery, without success.

Many years ago while Bob and I were working up at the Cemetery, a 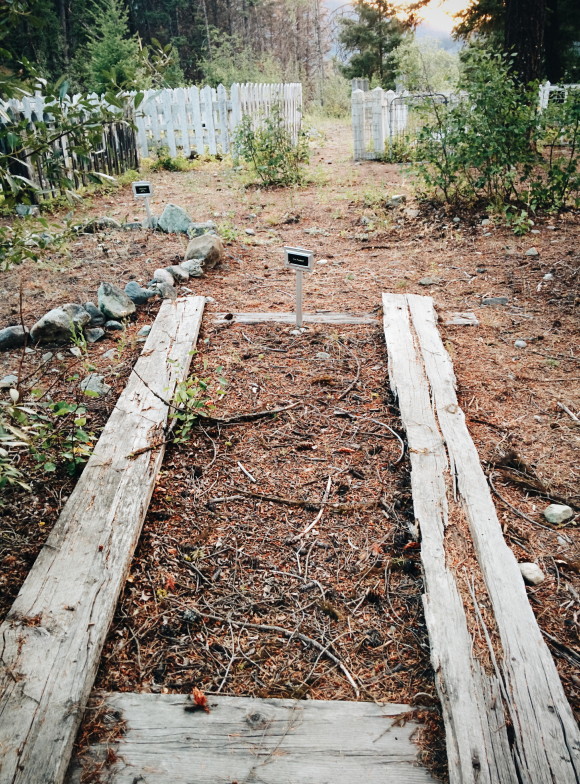 man who was Chinese was visiting the site with a group of historians.  He asked to see the Chinese section and when I showed him, he told us a story that the bones had been exhumed from there (for money received) but it was a scam and they were all thrown into a bone shed on the Island somewhere. We have also been told by a man who is the grandson of Foxcrowle Cook (a prominent business man of Granite Creek in 1885) that there are still 6 Chinese graves which were not exhumed. We contacted a professor at UBC to ask if he could use ground penetrating radar to try to find the graves and also to help us better map out the cemetery. He came up to scout out the ground and was excited to make it a class project. Unfortunately, UBC lawyers said he wouldn’t be allowed to do the GPR so we have never been able to confirm if there are still Chinese people at the site.

As recently as a week ago, I have been in contact with a woman from the University of Victoria.  She has found some records of deceased Chinese from Princeton and we are wondering if this might include Granite Creek. Unfortunately the information is all in Chinese. I have asked her to send me copies of all the records for Princeton as one of our Granite Creek Preservation Society members has a friend who he believes might be able to translate the information for us.  I’m waiting to receive the information so we can research it more.

Thank you to Diane Sterne for taking the time to answer our questions! If you are ever in the Southern interior of British Columbia, make sure to stop in Coalmont (and stay at the Mozey-on-Inn). There is a lot of history to take in.