Historically, black Egyptians were the first group of humans recognized for practices that not only preserved but celebrated the appearance of deceased. Egyptian tombs unearthed today reveal pristine mummified remains of antiquities royals. Much attention to detail was given to the deceased’s appearance and final resting place because of religious and metaphysical beliefs. Our Egyptian ancestors believed that the deceased’s soul would return to earth after completing a 3,000-year journey to the sun and back. During this time, the deceased’s spirit would obtain new knowledge and upon return would need to recognize and be able to reoccupy their physical body.

Weighing of the heart from the Book of the Dead

These beliefs led ancient funeral and death care practitioners to commit the majority of their lives to the study and practice of preserving and cosmetizing the deceased. Though much attention was given to safely removing the bodies main internal organs, the majority of the preparation of the deceased focused on their outer physical appearance. Extensive detail was paid to styling the hair, applying cosmetics and caring for the skin of the deceased. Skilled craftsman spent years designing elaborate storage containers called sarcophagus fashioned to resemble the deceased likeness while further protecting and preserved their bodies, ensuring souls would recognize them upon reincarnation.


Our Egyptian and other African ancestors believed that proper care and burial the deceased was essential for all members of society. For those deceased not buried in sarcophagi (the working class and the poor), there were various levels of care provided based on what mourners could afford. Common care for all deceased including bathing of the body with essential oils and natural resins and some form of mourning ritual which allowed grievers to express and receive support during their loss.

Upon being brought to America as slaves, many of our sacred rituals and practices were stripped from us. Particularly those pertaining to the care of our deceased.

Upon being brought to America as slaves, many of our sacred rituals and practices were stripped from us. Particularly those pertaining to the care of our deceased. Being considered as nothing more than property, no respect and care was given to our deceased by our owners/masters. It was illegal for slaves to have funerals. Slave bodies were discarded of in bodies of water, fields and unmarked graves with no viewing, services or acknowledgement of their lives having mattered. Showing any sign of grief and mourning was punishable by beating, torture, or death.

Illustration by Eleanor Taylor for the NY Times. See their Instagram for more.

Over time, conflicts erupted between slaves and white owners, and blacks were eventually allowed to resume caring for our deceased in a minimally dignified way and the homegoing was birthed. Homegoing’s differ from traditional European funerals because they celebrate the black deceased’s spirits ability to return home to its land of origin. This was vitally important to slaves because they understood that their physical return home was unlikely. Homegoing’s are celebratory and jovial in nature because it is instinctively recognized by mourners that freedom from bondage on all levels has been lifted by death. Homegoing’s are extremely spiritual in nature and are still practiced today among blacks some 155 years post slavery.

When a black family entrusts you with their loved one’s care upon death, we are trusting you with their hair and overall appearance. It is an expression of our personal identity, our history, culture, religious beliefs and relationship with society.

Mirroring our Egyptian ancestors, much attention and detail should be given to black deceased appearance in preparation for their homegoing.  Because of its sacredness to black people, much of that attention is to be focused on the hair, skin and cosmetic care in order to recreate the most lifelike and recognizable appearance attainable. Whether spoken or unspoken, when a black family entrusts you with their loved one’s care upon death, we are trusting you with their hair and overall appearance. It is an expression of our personal identity, our history, culture, religious beliefs and relationship with society.

Sadly, there has been no professional training offered through educational institutions or in the work place which focuses on the hair, skin, and cosmetic care of black dying and deceased exclusively. My response to these personal limitations and performance gaps is the creation of the continuing education course; Cultural Competency: Black Hair and Skin Care for Funeral Professionals©. This course has been designed to educate and empower end of life, death care and funeral service professionals to honor and celebrate black culture through proper hair, skin and cosmetic care of our deceased.

The care of Black bodies has a long and storied history. Our Egyptian and other African ancestors believed that proper care and burial of the deceased was essential for all members of society, particularly those pertaining to the care and appearance of our deceased. But when we were brought to America as slaves, our sacred rituals and practices were stripped from us, particularly those pertaining to the care of our dead. Today, by obtaining the basics for providing a level of care for Black decedents, historical and cultural respects can be paid. Funeral and death care professionals become empowered to renew balance while paying homage to the originators of our sacred practice.

*Header image is a still from the 2013 documentary Homegoings, via Fandor 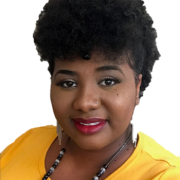 Joél Simone Anthony
My name is Joél Simone Anthony. I am a licensed funeral director and sacred grief practitioner in Atlanta, Georgia. Originally from Beaufort, South Carolina, I was raised in the heart of Gullah and Geechee culture. Spirituality has always been a huge part of my life and professional approach which is deeply rooted in ancient wisdom passed down from community elders, generation to generation. During my decade of service in the funeral service industry, I fashioned my unique background and professional experiences into a caliber and style of care and comfort that guides countless families toward healing through the exploration of alternative practices designed to help you navigate and heal through your journey with grief. ​It is my life’s work to educate everyone –regardless of faith, race, age, or status – that death, dying and grief are sacred and transformative to our journeys as human beings.

Dogs in the Afterlife: Ancient History, Myths and Religious Beliefs

By Rachel Osolen6 days ago

Christmas Zombies, Spirits and Goblins: The Dark and Chilling History of Ghost Stories at Christmastime

We loved collaborating with @justinsantora to desi

“Bog bodies” are corpses that have been natura

Happy Friday! For this week's euphemism we are exp