Content warning: This blog post will be discussing human bodies in collections, which were taken from their cultural places against the wishes of their people, through acts of colonialism. There will not be photos of human remains in this blog post

It is a sight that many of us are familiar with. You’re in a big city museum, looking at a display of artifacts taken from Egypt, and there in the corner of the room is a mummy, resting in its wood sarcophagus, wrapped in linen, arms resting elegantly against their chest. You may not think much of this person, or shy away from the body in the same room as you, or you may approach it with curiosity, all of which are completely valid reactions.

However, should we even be seeing this ancient body at all? In many fields of heritage, museums, anthropology, and archaeology, and other heritage professionals, this discussion has been ongoing for decades. The ethics of collecting and/or displaying human remains in museums, university collections, and even online, and the importance of repatriation are vital discussions as we continue to decolonise the field.

The ideas presented in this blog post are primarily in relation to the remains of BIPOC individuals, who have been historically exploited and removed from their graves for colonial interests. Burial traditions and practices around the world are unique representations of peoples’ relationships with death and dying and should be respected. All dead cannot and should not be treated the same. While some cultures may be comfortable with the display of human remains, many others are not.

“In 1887, [Franz] Boas successfully sold several crania from the Pacific Northwest…Boas lamented around the same time ‘It is most unpleasant work to steal bones from a grave, but what is the use, someone has to do it.’” (Redman 2016:47). The history of archaeology, anthropology, and museums in North America and Western Europe is steeped in quotes just like that one, from founders of their discipline. Because these early anthropologists and archaeologists were collecting remains through grave robbing ‘for science’ it didn’t matter how they were obtained – to them it was justifiable. While there are still those in social sciences that argue for such practices, the majority of heritage professionals are working to rectify these actions against BIPOC (Black, Indigenous, People of Color) communities.

By not acknowledging the ongoing trauma that these collections cause, we are continuing to perpetuate this cycle of violence instead of working to break it.

In 2021, the internet was shocked by news that the remains of two unidentified victims of the MOVE bombing had been passed between the University of Pennsylvania and Princeton University for 36 years as part of an anthropological collection. The MOVE bombing took place in Philadelphia, Pennsylvania, USA, on May 13th, 1985, when the City’s police force bombed a communal group known as MOVE. The bombing resulted in the deaths of six Black adults and five Black children, and the destruction of more the 60 homes in a primarily Black neighborhood. The remains belonged to two young girls, Tree Africa and Delisha Africa, ages 14 and 12, and were retained and used as ‘case studies’ without the knowledge of their families or community, who believed they had been cremated.

The issue with museum and university collections in what we commonly refer to as the ‘global west’ holding the remains of BIPOC is that many of these individuals ended up in the collections through acts of colonial violence. By not acknowledging the ongoing trauma that these collections cause, we are continuing to perpetuate this cycle of violence instead of working to break it. This does not mean than human remains cannot ever be displayed, but that it must be done by the descendent communities and cultural groups, based on their own cultural guidelines. An excellent example of this is the conscientious display of the bog bodies at the National Museum of Ireland / Ard-Mhúsaem na hÉireann, obscured from direct view unless the visitor chooses to see them. The bog bodies reside in their homeland of Ireland.

In more recent years, there has been a push to repatriate not only human remains, but sacred objects, artifacts, sculptures, and even architectural pieces that have ended up in museums around the world as the result of looting or unfair purchases. Dan Hick’s ‘The Brutish Museums’ is an excellent contemporary insight into the current climate of colonial collecting and the efforts for repatriation going on in the museum world. Hicks refers to the use of the anthropological museum in the 1890s through to today “as a weapon, a method and a device for the ideology of white supremacy to legitimise, extend and naturalise new extremes of violence within corporate colonialism” (2020:15). In short, the collection and retention of cultural objects and human remains is ongoing violence through colonialism, which is why repatriation is so vital.

A famous case for repatriation that you may be familiar with is the ongoing requests from Greece for the return of the Parthenon Marbles, also known as the Elgin Marbles for Thomas Bruce, 7th Earl of Elgin. Bruce removed the Marbles from the Parthenon in Athens, Greece, between 1801 and 1812. The Marbles still reside in the British Museum to this day, despite continued requests from Greece to have their property returned to them.

It takes years fighting the legalities that major institutions use to keep collections which were unethically obtained, before remains are returned to their homelands

An argument that comes up frequently when European or North American museums are asked to begin repatriating remains or artifacts is that “once you give that back, you’ll have to give back everything.” I think the answer to that is yes, yes you do. Even by acknowledging that this may be the result of repatriation requests, institutions are admitting that their collections were not ethically obtained. This is especially vital for human remains, collected by individuals like Dr. Boaz (quoted above), against the burial wishes of the deceased.

Aztec mask in the British Museum

In 2020, the remains of two Beothuk individuals, early native peoples of the island of Newfoundland, were successfully repatriated from into the care of The Rooms Provincial Museum in St. John’s, Newfoundland and Labrador. The individuals, Nonosabasut and Demasduit, were taken from their graves by William Cormack, and eventually ended up in Edinburgh. The repatriation requests began in 2015 with Chief Mi’sel Joe of the Miawpukek First Nations in Conne River, and these early requests were initially denied because the modern Indigenous people of the province were not considered ‘direct descendants’ by the Scottish legislation for repatriation of remains. Having finally made their way home, Chief Joe would like to see Nonosabasut and Demasduit finally reburied in their native soil.

This story is only one of many examples of the long and tedious process of repatriation of human remains. It takes years fighting the legalities that major institutions use to keep collections which were unethically obtained, before remains are returned to their homelands.

In the digital world, this discussion of ethics of displaying human remains extends to images that we post online. For archaeology and museology in North America, the result is typically the removal of images of human remains from websites or blog posts. This has been done out of respects for the individuals and their cultural practices, and because in many cases these remains are from BIPOC individuals who have been taken without permission and ended up in the collections of North American or western European institutions.

While it is vital to disseminate information on burial practices and funeral traditions online as a mortuary archaeologist for educational purposes, this can be done without showing intimate images of human remains. Researcher Matthew Austin (2014:13) wrote that “some authors even feel as though it is something of a public duty to effect a greater public engagement with the past and increase awareness of the work of archaeologists”, and this is true for many other fields as well. This statement likely resonates for many early career researchers (ECRs), myself included, but this online engagement can be done without exploiting the remains of the deceased.

The ethics of human remains in museum and university collections is a complex one, and an ongoing discussion across the heritage fields around the world. As an archaeologist who works with burial spaces, I am actively following these cases and working to ensure my own research respects those buried in the spaces I study.

As many museums in North America and Europe remove human remains from display or create barriers to keep individuals from seeing the remains unexpectedly, I ask you to consider what you would want done with your own body hundreds of years after you died, and how your descendants might feel if they learned you were in a museum and not your grave. 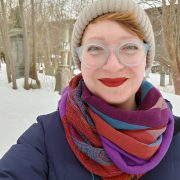 Robyn S. Lacy
Robyn S. Lacy is a historical archaeologist and gravestone conservator, based in Newfoundland and Labrador, Canada. She is currently working on her PhD in archaeology, where her research focuses on 17th-century burial ground development in northeast North America. She co-owns Black Cat Cemetery Preservation with her husband. When not writing about historic graves, Robyn can be found hiking with her husband, playing with their two black cats, or painting.

Misrepresentation of Trans Dead, and Resources to Prevent it from Happening to You

By Yannick-Robin Eike Mirko17 hours ago