With the recent success of Top Gun: Maverick (2022), I finally decided to watch the original and see what all the fuss was about. Ostensibly, Top Gun (1986) is a movie about Pete “Maverick” Mitchell, a hotshot pilot in the US Navy’s elite fighter weapons school, and the lessons he learns as he competes to get the girl and the prestigious TOPGUN Trophy.

But really, Top Gun is a movie about grief.

“Talk to Me, Goose”: Top Gun, Grief, and Toxic Masculinity

Through the eyes of Tom Cruise’s Maverick, we are introduced to the world of the United States Navy Fighter Weapons program – aka “TOPGUN.” The fictional version of this elite fighter weapons school sets up a testosterone-fueled competition to prove one’s aeronautical and sexual prowess that serves as a hotbed of toxic masculinity; a “cultural concept of manliness that glorifies stoicism, strength, virility, and dominance, and that is socially maladaptive or harmful to mental health.”1 Throughout the film, we are treated to scenes of locker room posturing, sweaty and hyper-aggressive volleyball games, reckless stunt flying – like buzzing the control tower – womanizing, and Maverick’s blatant harassment of female contractor, Charlie Blackwood.

Maverick seems constantly to be fighting against the trajectory of his grief, with devastating consequences.

From the start, it’s made apparent that there is already a great deal of grief in Maverick’s life, and that he struggles to grapple with it. Maverick lives under the shadow of his father – Duke Mitchell – whose circumspect death has left him without closure. Fellow pilots and TOPGUN instructors alike note that the ambiguous circumstances – and the clear implication that his father may have been culpable in his own demise – have a significant impact on Maverick’s actions in the cockpit. “It’s like you’re flying against a ghost,” his RIO and best friend, Goose, notes at one point. “It makes me nervous.”2

Grief is a psychospiritual trauma. Just like any physical trauma, it must be tended to and allowed to heal through mourning – the outward expression of our grief. Instead, Maverick seems constantly to be fighting against the trajectory of his grief, with devastating consequences. Trying to out-fly his father’s reputation and loss, Maverick makes an impetuous flight through his wingman’s jet wash during training, throwing their F-14 into a death spiral over the ocean and ultimately resulting in Goose’s death during the subsequent bailout.

Not only is Maverick forced to contend with new grief atop the old, but his grief experience is also disenfranchised by his superiors.

While we often associate trauma with sudden and unexpected deaths, all deaths have the capacity to traumatize survivors.3 And there is no doubt that Goose’s death is traumatic for Maverick – a new wound atop the old, unhealed ones his parents’ deaths left behind. There are three key factors which play a significant role in the grief experience – timeliness, preventability, and culpability.4 Maverick’s father died young, leaving behind a wife and small child, in what he is led to believe was likely a preventable accident, in which his father was rumored to be at fault. Goose dies young, also leaving behind a wife and small child, in a preventable accident, for which Maverick – though he is cleared of any wrongdoing – feels responsible. It is a recipe for traumatic and, potentially, complicated grief.

Not only is Maverick forced to contend with new grief atop the old, but his grief experience is also disenfranchised by his superiors. Disenfranchisement occurs when a loss is not considered to be significant, when the relationship between the bereaved and the deceased is not sanctioned or socially acknowledged, or when grief is otherwise invalidated on the basis of identity.5 It denies the bereaved their ability to mourn publicly and receive social support. In the hyper-masculine environment of TOPGUN, the emotional release of open mourning is ‘unmanly’ and is, therefore, quashed. The most acknowledgement Maverick’s profound loss receives is the brief “I’m sorry about Goose, everybody liked him” that Val Kilmer’s Iceman delivers like he is dragging the words out of himself.

But Maverick’s grief for his RIO is not only disenfranchised – it is suffocated. Coined by Dr. Tashele Bordere, suffocated grief is not just unacknowledged, but actively punished.6 In the aftermath of Goose’s death – seemingly not even 24 hours later – Maverick is confronted by his commanding officer, Viper. “You fly jets long enough, something like this happens,” he’s told. “In my squadron in Vietnam, we lost 8 of 18 aircraft – 10 men. First one dies, you die too. But there will be others, you can count on it… You’ve got to let him go.”7

…the environment of toxic masculinity cultivated in the TOPGUN program disenfranchises and suffocates Maverick’s grief.

Instead of granting Maverick the space and time to grieve, his commanders immediately push for his return to the cockpit and, in the guise of advice, give him an ultimatum – “show up tomorrow and graduate with your TOPGUN class, or you can quit.”8 And in a community so saturated with competition and machismo, is there really any choice at all?

Not only does the environment of toxic masculinity cultivated in the TOPGUN program disenfranchise and suffocate Maverick’s grief, it creates a mechanism by which the veteran servicemen pass their traumatic grief on to the next generation. At the time Top Gun was filmed, actor Tom Skerrit would have been 53; assuming his character – Viper – is of a similar age, Maverick’s commanding officer is a man who has grown up in the shadow of three different wars – World War II, the Korean War, and the Vietnam War where he saw combat. He is not unsympathetic to the effect of Goose’s death, but his answer to the loss is essentially a callous “you’ll get used to it.” It is a picture of intergenerational trauma, passed from the Boomer generation of servicemen to the new generation of Gen X recruits in a vicious cycle of disenfranchisement, repression, and suffocation of grief in ways that prevent community healing through trauma- and grief-work.9

Even when Maverick is provided with the long-sought truth of his father’s death, the motivation behind this revelation is not to foster healing or provide him with closure. Instead, it is used as a tool with which to motivate a man grappling with the festering, old wounds of unhealed loss on top of the fresh trauma of losing his best friend in an environment where emotional insight and expressiveness is ground out in favor of stoicism and aggressive action. Essentially, Maverick is goaded into “soldiering on” without the opportunity, ability, or appropriate outlets through which he might manage his grief.

Top Gun is, ultimately, a story of grief deferred.

4-“Sudden Loss Grief: The Shock, The Trauma, The Ways to Cope with an Unexpected Death” https://eterneva.com/blog/sudden-loss/ 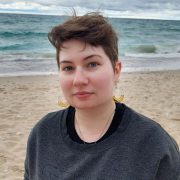 Meg Halstead
Meg Halstead is currently a Michigan-based MSW student whose background includes graduate coursework in Thanatology and a BSc in Anthropology, with particular focus on medical and forensic anthropology. In their graduate studies, they created and shared a presentation on Aging and Dying While Trans* - a resource aimed to provide education on the unique end-of-life concerns of queer and transgender elders. When not preoccupied with death, they are a reader, writer, and yarn artist.