The ways human beings have memorialized the dead has always been a reflection of a society’s changes over time. Burying and commemorating the dead are practices that we have done for thousands of years, and are characterized by constant evolution. Developing from the “grave fields” of prehistoric times, to religiously sanctioned and controlled graveyards, and again into the the diverse cemeteries of today; cemeteries and their construction have a rich history.

The evolution of the Architecture of Death is well represented in how cemeteries have been designed and constructed over the years, as different methods and designs have developed to suit changing social, cultural, and geographical landscapes of death. Here is a quick look at the main types of cemetery architecture that exist today, and how they are designed.

The Architecture of Death 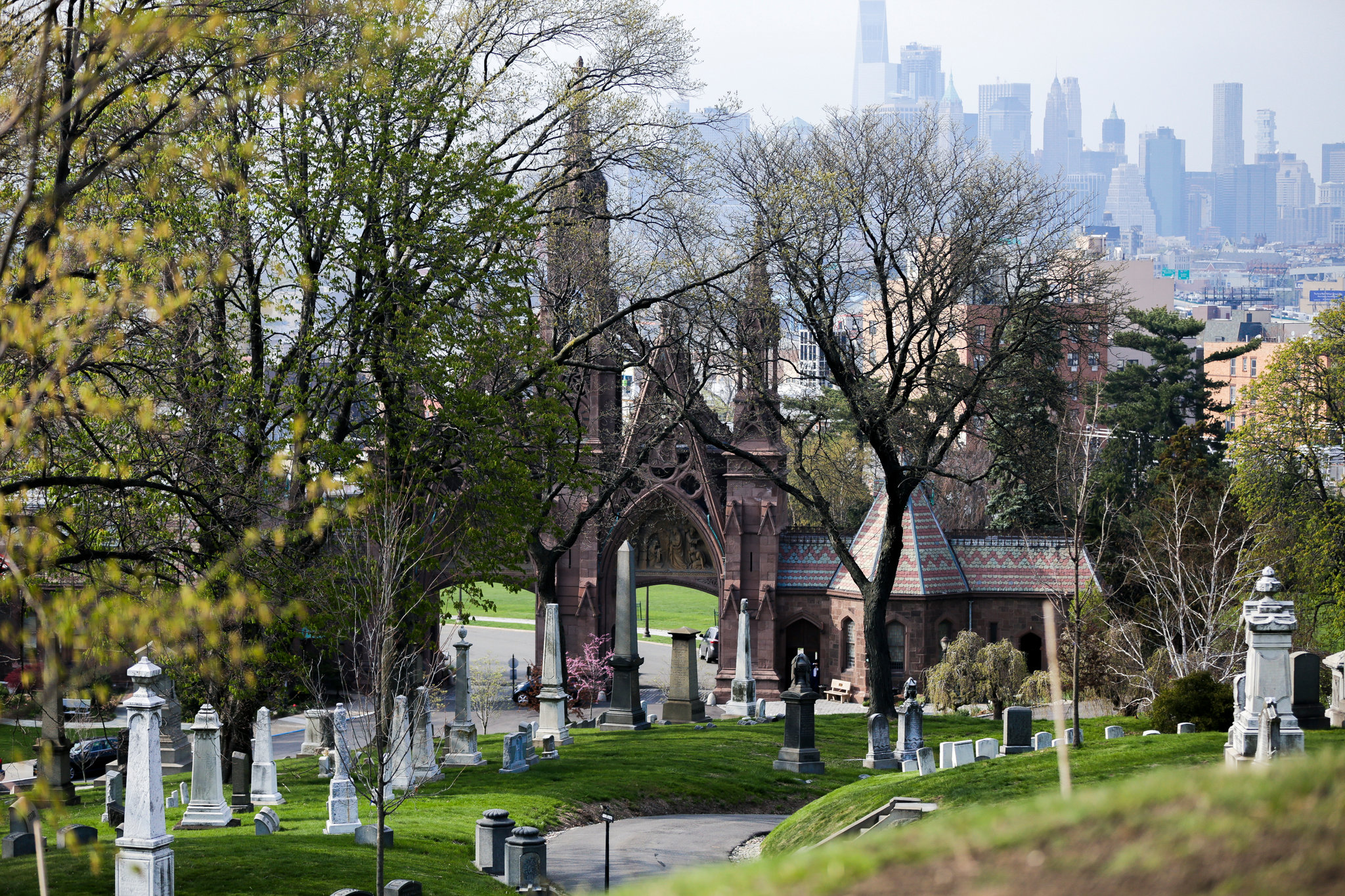 The urban cemetery is an increasingly common type of cemetery that is located in (you guessed it!) urban environments. Early urban cemeteries were typically located in churchyards. These filled very quickly, however, causing the burial markers to become cluttered, and to shift in the earth. In fact, many urban cemeteries have multiple burials in the same grave, which is a result of their limited space. It was not uncommon for new soil to be laid down on top of older graves to create new burial space (yikes…).

Because of this practice, some cemeteries rose 10-15 feet above the level of the surrounding land. Needless to say, new burial grounds had to be established, and were designed in a more appropriate fashion. The plots were often laid out in a grid to avoid the chaos of older churchyards. Urban cemeteries eventually developed into a more landscaped form, as societies began to prioritize orderly and “civilized” designs over the clutter of the past. 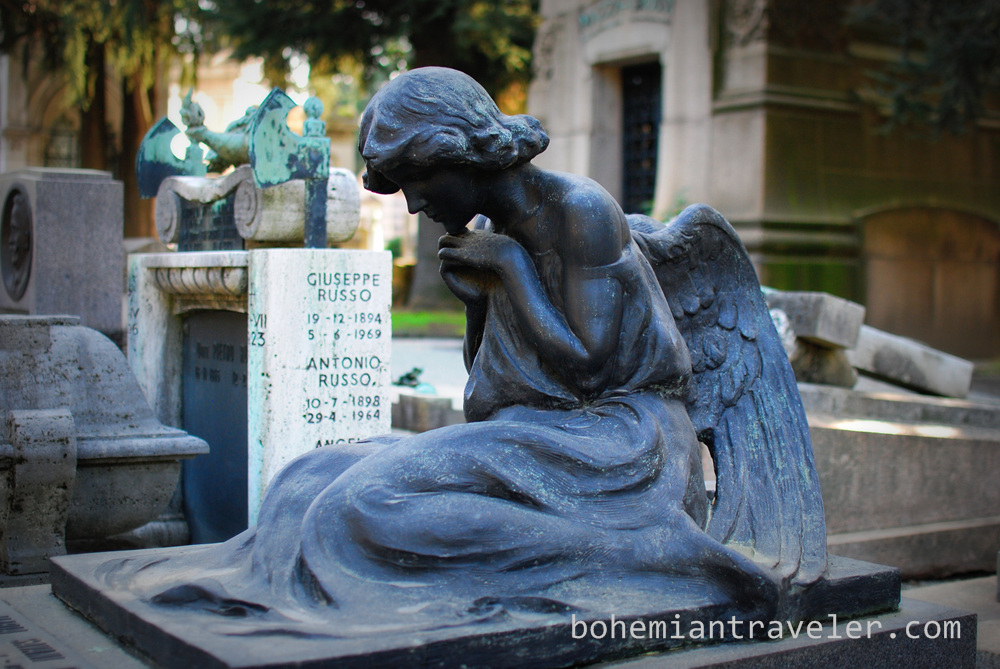 When you imagine a cemetery in your mind, you are likely imagining a monumental cemetery. A monumental cemetery is the traditional cemetery style, featuring headstones and monuments that rise vertically from the ground to mark the burial site. In many cases, the entire grave is covered by a slab of stone, made from marble, granite, or a similar stone material.

These slabs of stone are surrounded by a small fence, which is often made of stone, wood, or cast iron. In some cases, when many family members are buried around each other (either vertically or horizontally), the slab of stone and the fence may cover or surround a number of graves. These kinds of cemeteries are very common in Europe, and can be very ornate, often featuring engraving of the deceased on the headstones. 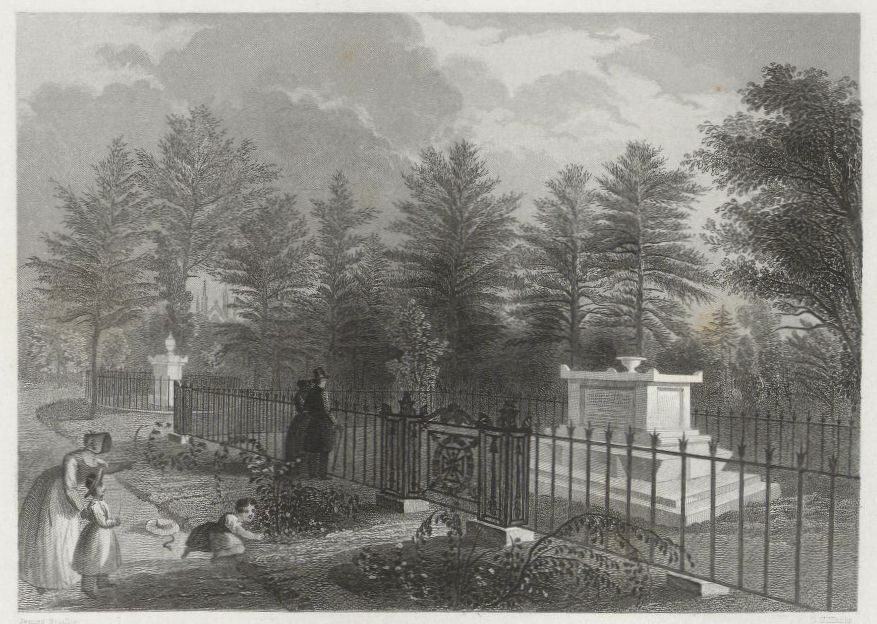 The garden cemetery is perhaps one of the most beautiful types of cemeteries. They are characterized by a park-like design, and tend to be much more sprawled out than other types of cemeteries. The idea for garden cemeteries first came from the British architect, Sir Christopher Wren, in 1711. He felt that that cemeteries should be built with planned walkways that gave better access to graves, and should incorporate many plants, such as flowers, bushes, and trees. By the 1800’s churchyards in urban environments were becoming very overcrowded, and Wren’s ideas were finally realized.

The first garden cemetery was the Père Lachaise Cemetery in Paris, which opened in 1804. Many other cities, such as London, quickly followed suit. Because these cemeteries were typically outside of the city center where there was greater space, garden cemeteries are also called rural cemeteries. Inspired by the English landscape garden movement at this time, garden cemeteries often look very much like parks, with lots of plants and beautiful walkways to enjoy. 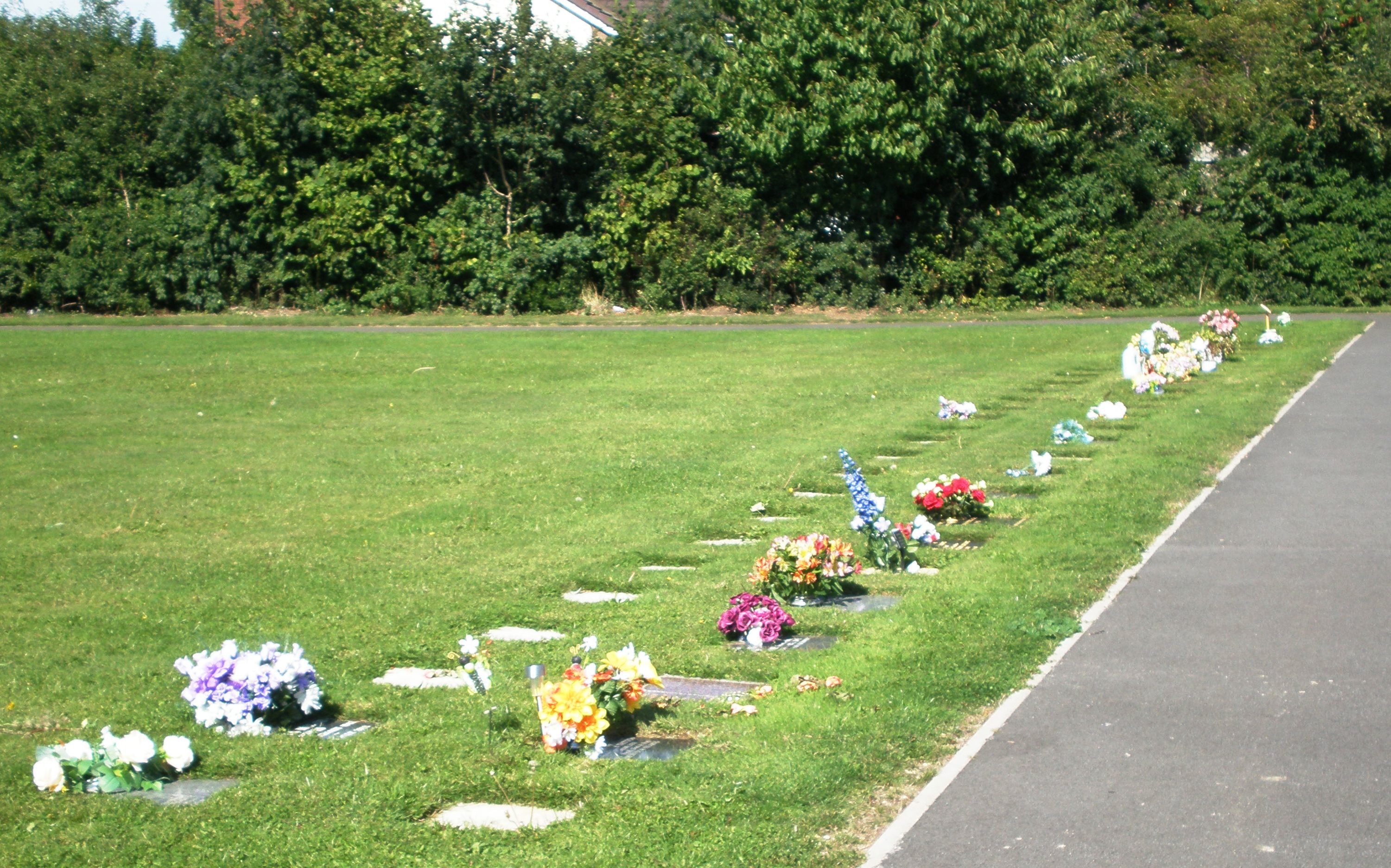 First introduced in Cincinnati in 1855 by Adolph Strauch, lawn cemeteries, as you might have guessed, are covered with grass. The graves in a lawn cemetery are marked with a commemorative plaque that is place horizontally at the head of the grave site. While each headstone is different, there are often certain size restrictions in place in lawn cemeteries. This makes the cemeteries look more uniform-looking than other types of cemeteries, and also makes them easier to maintain. Lawn cemeteries also usually feature gardens and trees around the perimeter of the cemetery.

In addition to traditional lawn cemeteries, a second, more recent type of lawn cemetery has been developed: the lawn beam cemetery. 10-15 cm high concrete slabs, or beams, are lain in horizontal rows across the cemetery. Commemorative plaques that conform to standardized size and material restrictions are then placed on these beams, next to each grave. The graves themselves are covered in grass, like traditional lawn cemeteries. The areas between the beams allow for easy maintenance of the land, and the design of raised beams prevents the plaques from being overgrown with grass and other greenery. It also creates ample space for families to leave flowers and other tokens by the plaques, with no fear of them being damaged. 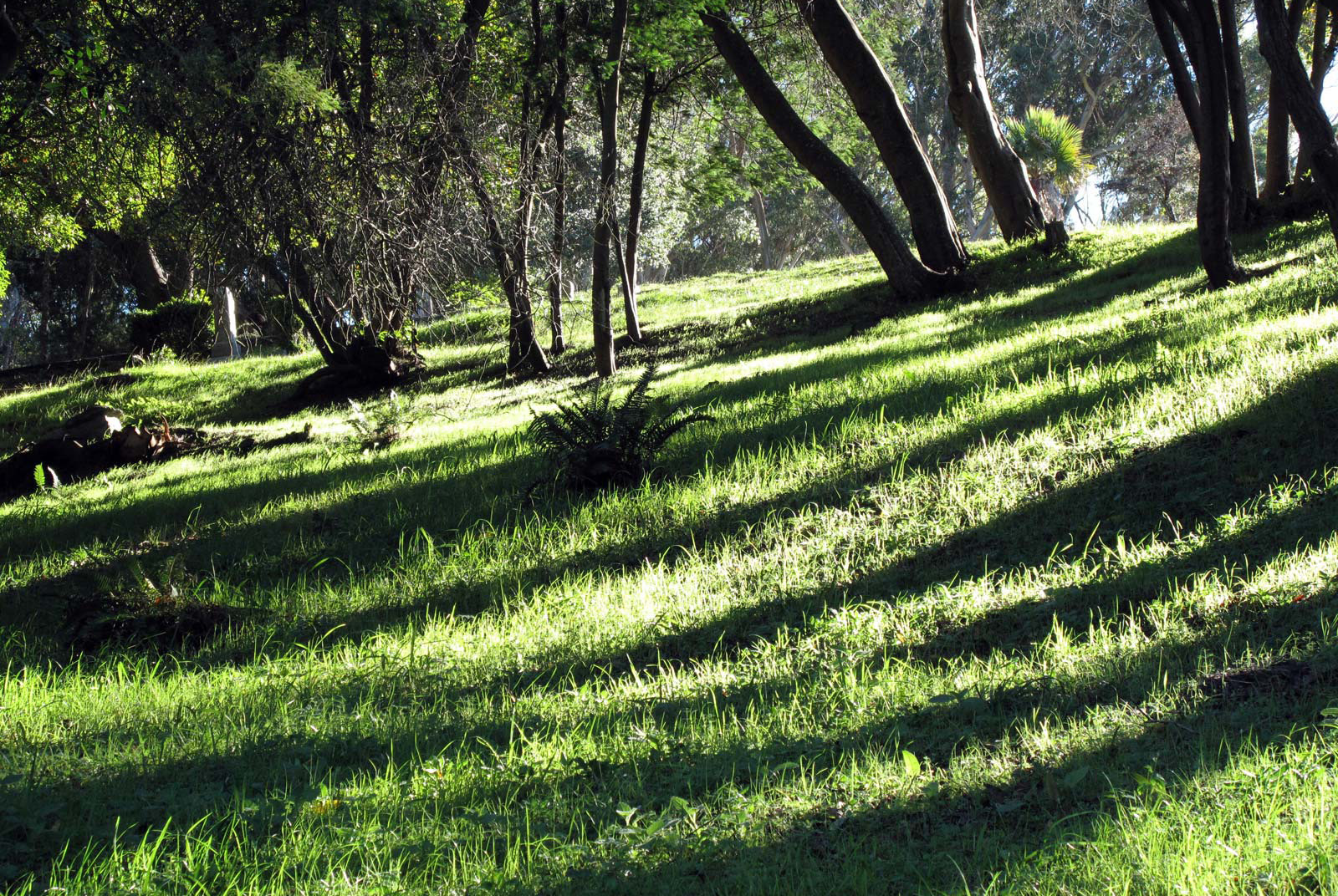 A natural cemetery (also called an eco-cemetery, or green cemetery) is a relatively new style of cemetery that aims to provide a more eco-friendly burial environment. In a green burial, bodies are not embalmed and therefore take less time to decompose and no harmful chemicals are leached into the soil. Generally only biodegradable material, such as shrouds made-up of organic fabrics, or simple pine or wicker caskets are used for the internment. This ensures that no metals, plastics or finishes will remain in the soil. Natural cemeteries are typically designated areas of bushland or forest, and usually have minimal paths or formal landscaping.

Because of the natural landscape of many of these cemeteries, where a body is buried often depends on what locations in the cemetery are available and easily accessible at the time of burial. Because of this, the layout of natural cemeteries can be, in fact, less efficient. This is made up for by the rapid decomposition rate of natural burials, so that grave sites can be reused. That’s right, reused! In natural cemeteries, there are no headstones used (though trees and indigenous rocks are often placed at grave sites), as the land is meant to be used and reused over time, offering the most environmentally friendly burial option possible.

As green burial is becoming a popular choice, some traditional cemeteries (as mentioned above), may now offer natural burial options. These cemeteries would be referred to as “hybrids,” offering both traditional burial, where monuments, vaults and embalming is allowed, while having a designated space for natural burial.

If we’ve missed anything in our The Architecture of Death list, let us know in the comments!