Caitlin Doughty from Ask a Mortician recently posted a video about Peter Stefan and the scandal surrounding his funeral home. Stefan, a funeral director from Worcester, MA, had his license suspended in 2019 when authorities found nearly a dozen decomposing and unidentified bodies in his possession (note: Stefan’s license was reinstated in early 2020). Doughty’s video highlights an important issue: how should we handle abandoned, indigent, and unclaimed bodies in America, many of which languish in morgues for weeks or months?

With the influx of deaths caused by the novel coronavirus, important questions about how we store the dead in times of crisis have been pushed into the spotlight.

The reality is that beyond this crisis, morgues, medical and private facilities, along with funeral homes, will often keep unclaimed bodies in storage until they can be cremated and buried in mass graves.

Who these unclaimed bodies belonged to, and what led them to become unclaimed is not a simple answer. We reached out to different death professionals, and dove into laws and policies across the states, to learn more about how these bodies are processed, and why the numbers of unclaimed are on the rise.

This is What Happens to Unclaimed Bodies in America

Policies and Laws Regarding Unclaimed Bodies in America 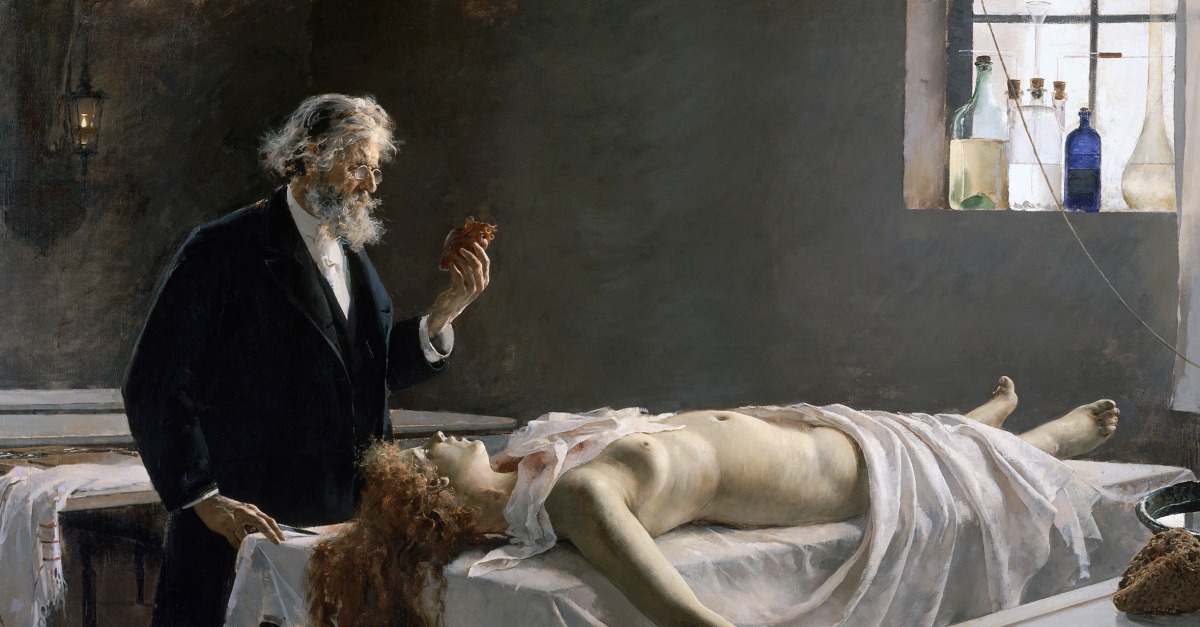 Autopsy, by Enrique Simonet, 1890. Museum of Málaga, Málaga, Spain. In the 1800s, unclaimed bodies would be used by medical schools for dissections. The practice does continue to this day in some parts of America.

In the United States, when a body goes unclaimed it becomes the responsibility of the government, which is similar to Canada, but the laws and regulations vary more widely than they do in Canada.

In 1831 and 1832, Anatomy Acts were passed in many states that allowed for medical schools to dissect unclaimed bodies. Unfortunately, many of these bodies went unclaimed because the families were too poor to afford a funeral. This led to a public outcry that resulted in the banning of body donations from the unclaimed in many states. In states like Oregon however, the unclaimed are still largely going to medical schools, where the institution pays for the cremation of the remains.

America has no uniform system for managing the unclaimed. The only federal level role for the unclaimed dead falls with The Department of Veteran Affairs, who will arrange a burial in a military cemetery for veterans.

There is no standard practice around reasonable searches (the various avenues of research and investigation for the identity of the body and next of kin or claimant), with laws also varying by state, county, and city. Though Joshua Slocum, Executive Director of Funeral Consumers Alliance, explains that most states require that the government must make a good faith effort to locate next of kin.

Some states consider a few days sufficient for a search, while others say the body must be held for a month and can only be buried or cremated if the kin is not found in that amount of time.

What happens to the Abandoned, Indigent, or Unclaimed Body in America?

Unclaimed bodies are mostly cremated in the United States. Cremation lowers the cost to the government, and is more efficient for storage. The ashes are often buried in a large collective grave, or in a columbarium (above ground mausoleum for urns). Ashes may also be stored in morgues, funeral homes, medical or private storage facilities. The state usually keeps a record of the person’s identity, if known, and where the urn was buried. 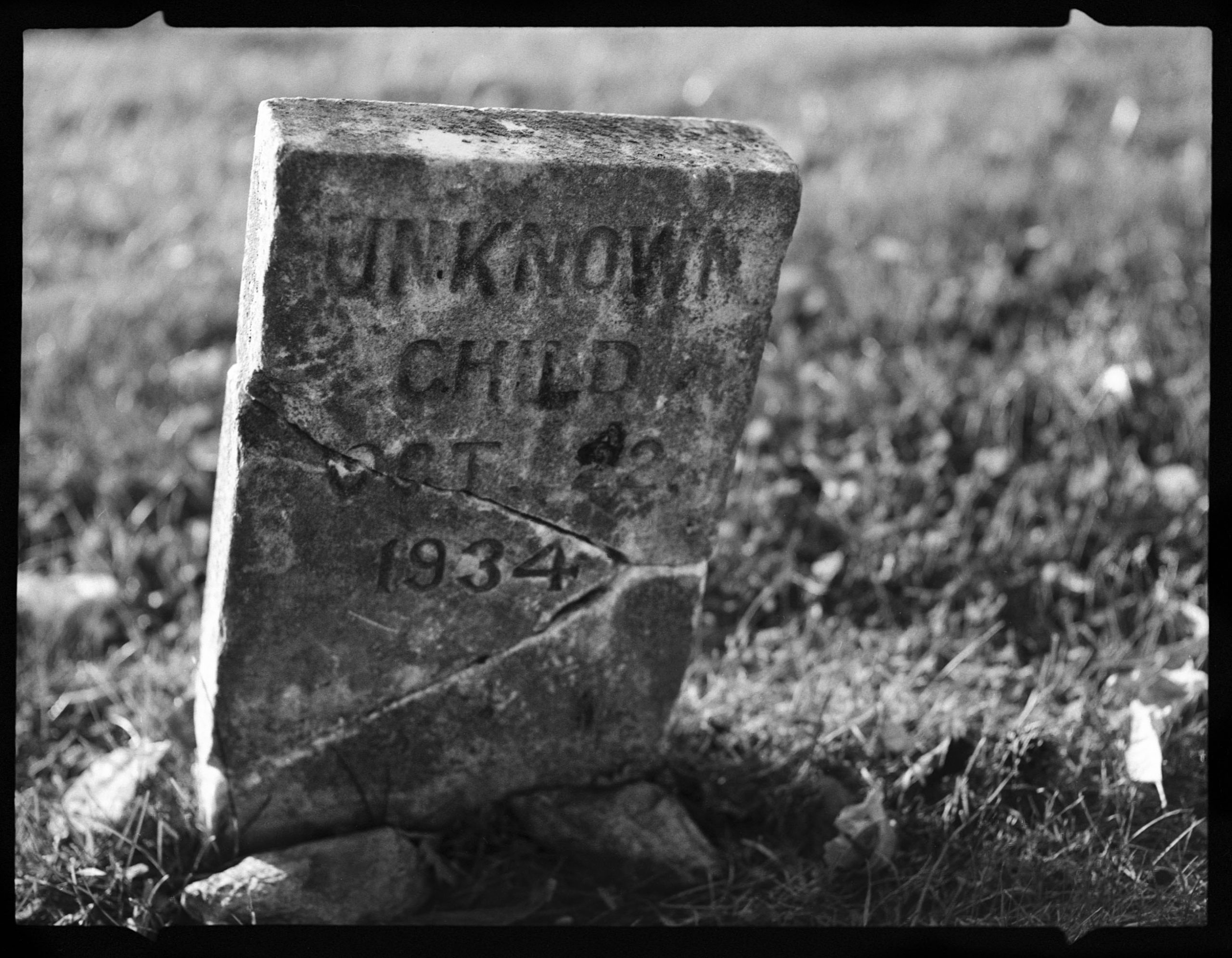 A sad stone in the old Potters Field. Westminster, Maryland. This is the final resting place of the unwanted and unidentified. Some may have died at the nearby Almshouse, which is now part of the Carroll County Farm Museum. Image via Bryan Costin.

In Massachusetts, state law allows a funeral establishment to scatter unclaimed cremated remains in a cemetery area designated for that purpose after 12 months. The Oregon State Hospital has thousands of cremated remains in storage, and recently published an online searchable database to help identify next of kin.


Funeral homes may have what is known as the “cremation closet.” This is a non-public area where the unclaimed cremated remains are stored as they wait for a more permanent interment. And though there exists many horror stories about body storage, most funeral homes are respectful to the remains they have onsite, and do their due diligence to identify next of kin or arrange a burial.

Governments don’t have an emotional interest in the unclaimed dead. That’s not mean or uncaring, it’s just a fact.

Peter Stefan, mentioned above, has around 300 stored cremated remains – some that date back to 100 years – with the full intention of giving each one a proper burial. His compassion towards the unclaimed is admirable, but he is held back by bureaucracy and lack of funding. This is not just an isolated case as funeral homes, medical facilities, and storage facilities across the United States lack funding for proper burial, don’t have the staffing and resources to conduct their own reasonable searches, or must wait for authorities to close the cases surrounding their deaths.

In states that bury the unclaimed, most have either bought a number of plots in an existing cemetery, or, a few places like New York City, have their own land that they use as a cemetery for the unclaimed dead. In fact, Hart Island in New York City is the largest tax-funded burial ground in North America with more than one million people buried in mass graves since 1875.

A trench at the potter’s field on Hart Island, circa 1890 by Jacob Riis

Melinda Hunt founded The Hart Island Project, which maintains an on-line database of people buried between 1980 and present as well as maps of their grave locations. Hunt told us that, prior to COVID-19, 6-10% of recorded deaths in NYC are unclaimed and buried on Hart Island.

Rituals around the burial of the unclaimed are not common. “First, some things to remember about unclaimed bodies.” Slocum explains, “People tend to ask questions like, ‘Does anyone do a ritual for them?’ This assumes that there’s something ‘wrong’ or ‘cold’ about not doing ceremonies for the unclaimed dead. But that’s not really straightforward, is it? The dead don’t know what we do or don’t do with their bodies. It’s not possible to ‘insult’ or ‘neglect’ an unclaimed body. There is no person there who is experiencing anything.”


That being said, there are still some states that have rituals around unclaimed burials. In Los Angeles, unclaimed bodies are cremated if no one comes to retrieve them within a month of death, after which the remains are kept in the county coroner’s office for another three years. At this point, the remains are buried in a mass grave with an annual interfaith funeral—a practice that dates to the 1890s.

Remember Oregon? They also have rituals around the cremation of their unclaimed bodies, and will even help pay for additional funeral costs if the next of kin are discovered.

How many Unclaimed Bodies are there in America?

It is difficult to know, since the processes around dealing with the unclaimed vary from state, county or city. Though Slocum explained there are many states that require that the names of the unclaimed are recorded, so there is a way to figure out how many are unclaimed in different regions around the country. For example, in Los Angeles, back in 2018 they buried 1,457 people in their annual burial ceremony.

There will always be unclaimed bodies, but the systems around the abandoned, indigent, and unclaimed needs to be improved.

The political realities of death and race in America also adds to the difficulty in accessing the number of unclaimed. In the American South for example, activists are trying to find and record the forgotten bodies of Mexican migrants, many of whom travel with few documents. Elsewhere, many of the unclaimed come from lower-socio economic areas, where families who cannot afford the cost of a funeral may not claim a body.

There will always be unclaimed bodies in America. What can we do about it?

There will always be unclaimed bodies in America, but the systems in place to handle the abandoned, indigent, and unclaimed clearly needs improvement.

A light at the end of this bureaucratic tunnel are the professionals within various healthcare organizations, funeral homes and coroner’s office that are working to improve this situation.

Some tips on how facilities and institutions can improve the situation include prioritizing advanced care planning, documenting wishes and claimant information, and creating a plan within the organization that follows the reasonable search. All facilities involved with the unclaimed need to communicate more and help and support each other.