I wore a hideous yellow dress to my mother’s funeral. Every day before that one, for at least three years, I had worn black as a shroud of comfort, owning the dark side as my normal. But on the day I put my mother to rest absolutely nothing was normal. Nothing could console me and I hated myself. It was the worst day of my life.

In my years as a goth girl, many a prowling dolt would approach me at nightspots and say: “Hey, sexy. Just come from a funeral?” I typically replied with deadpan simplicity, “yes.”  I’d watch their reactions closely. Some laughed, some cringed, one cried.


Yes. I wore a yellow dress. Not butter, not honey, or lemon yellow. Imagine Cheese Whiz blended with egg yolk, mixed with the waning hues of bruised skin. Revolting yellow. The color of the insane. The color of my grief. The color I would never ever wear again.

Image of the author

I was first to arrive at the church. The funeral director hurried over and asked me to look over the deceased. Was everything to my liking?

After my mom passed away, I convinced myself that I had brought death to her front door. After all, my mother’s in-home visiting nurse had told me so.

Beginning to sweat and teeter, I was forced to make the walk towards my mother by myself. I hadn’t known this kind of alone before. I began down the long aisle, with trepidation that grew into shame, toward the horrific scene awaiting me.

My mother had been battling a chronic lung disease for the whole of my life. I had reacted to it in a variety of ways. Rage, drinking, and rebellion. Of course I have since realized that I had been suffering from depression since as far as I could remember. After my mom passed away, I convinced myself that I had brought death to her front door. After all, my mother’s in-home visiting nurse had told me so.

I had arrived home from a long night of bar and club hopping just after dawn. Confused, I found my mother preparing to leave for the hospital, a trip from which she would never return. Her nurse scolded me, “Your mother has been up all night worrying herself sick about you! And now she needs to go to the hospital. Because of you!”

I was 23 and my life would never be the same again. Had this evil nurse appointed herself judge and jury because I looked like a selfish miscreant who dressed like Morticia Addams? Possibly. Had she become overly proprietary of my mother’s care? Maybe.

Whatever brought that nurse to say what she did will never be known to me. But, the damning accusation remains an ongoing battle. My guilt ran the size of a python and slithered its smarmy way into my brain and my gut and my heart. Guilt festers, feeding on the fresh meat of your loss, suffocating all logic and self forgiveness.

I thought, they’re just scared of catching my grief, because, looking back, there was no face mask or vaccine for that.

Friends told me to ignore the Nurse’s condemnation, but that was not possible. Twenty years had to pass before I could speak about that night without hyperventilating or inducing panic attacks. When I finally revealed what the nurse had said, I felt as though I was exhaling a thick swarm of plague-carrying flies that had proliferated within my guilty soul.


So, back to my walk of shame down the church aisle. Toward my dead mother in her pretty coffin, clad in the silver gown she had worn to my sister’s wedding. I pushed the hair off of my forehead, slick with perspiration, as my legs shook with each heavy step.

I thought I’d have to take hold of my eyeballs and manually roll them towards my mother’s body.  Somehow, I located my mother’s graceful fingers clamped onto her signature crystal rosary beads. The funeral director asked if everything looked “acceptable.” I could only nod, as my eyes had now fixed onto my mother’s tightly stitched lips. This ruined everything about her lovely face which had always reminded me of the Mona Lisa. I became furious with my lovable but crazy aunt, who had often spoken in tongues and claimed that my mother would recover one day. Auntie had insisted on the open casket –  she wanted to “see” my mother one last time.

My mother. In a coffin. Never to open her eyes or her heart again. I had sent her to this place. Me. Myself. I. The pearlescent lavender finish on the vessel in which she lay could not make up for that. The slick prayer cards and rehearsed sermon did nothing for me.

On top of that, no one ever asked me if I was doing okay. Some friends were loath to listen. I thought, they’re just scared of catching my grief, because, looking back, there was no face mask or vaccine for that. So pity from a distance would have to do.

It was then that I realized just how embarrassing death is. From botched last wishes to what’s found in the dearly departed’s nightstand.

At services, when the deceased are on display, guests stare into the coffin sizing up the corpse like it’s a beauty contest for the dead. Cliches and furrowed eyebrows are abound, disguised as condolences.  The deceased has left a funeral playlist with precise instructions, but no one bothers to honor their request. Family is preoccupied with their kids, their jobs, and the dead’s estate.

Relatives sift through love letters, gaudy jewellery, and examine the dead’s plain white underwear. The bureau drawers are filled with unused tools and dried up pens. Is money hidden in-between the pages of books? Who gets the silverware or the yellowed wedding dress or the carved Koa pineapple from Maui?  You feel like a vulture, a hoarder, a thief. You are. Not to mention that the dearly departed’s will is a mess.

With the onslaught of anticipatory grief, I’ve taken to envisioning my own send off to the great beyond. My immediate family is well aware that I am to be cremated and tossed into the sea. Also, that they should be careful of ash blow back, as seen in any number of films, because they won’t want me getting in their face now, or then. Having already curated my own funeral/memorial playlist, I insist that it be played. It includes Bowie, Beethoven, Duran Duran and Dead Can Dance.  It is fun, rebellious, and moving. It is to be the voice of my soul from the grave. The living may not get their way, but the dead must.

Never pretend everything is ok. Just do you. Wear black to mourn the dead, wear a costume, or, even – wear yellow.

Other than those two instructions, I’d like if my family ordered me a beautifully decorated Death Day Cake and hand out my oddball paintings and jewellery to guests as they exit. Also, I’d be eternally grateful if my memorial had a theme, with costumes and trivia. I know, I know. People get turned off by this sort of thing. Or they’ll think of it as a mockery of me, or of death itself. So what? I have spent a lifetime mocking death –  as a Catholic, as a horror fan, as a goth, and as a young woman who lost the person she loved most when she was 23.


Look, if something feels abnormal it probably is. Let it be. Never pretend everything is ok. Just do you. Wear black to mourn the dead, wear a costume, or, even – wear yellow. Expose yellow for the fraud that it is. Eviscerate its smiley face, its weepy sunshine, its crutch of conformity before it does you. I’m fairly certain that’s what I had in mind when I got dressed on the morning of my mother’s funeral. Yet somehow, I managed to handle the many compliments regarding my repulsive attire with the grace of the strong, still grieving, woman I would become. 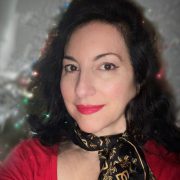 Monica Z. Sage
Monica Z. Sage hails from New York and is currently living in Southern California. She has been published in Word Riot Literary Magazine as well as SCBWI’s magazine/blog Kite Tales. Also, a short horror tale she wrote was animated and utilized for an Audible ad campaign. Monica will soon complete a second young adult novel that also addresses death preparedness and grieving. When not penning stories where water, blood, and music congeal, Monica upcycles vintage jewelry and plays her bass guitar.

Sending Text Messages from the Afterlife

How to Hold a Hybrid Memorial Service, a Step-by-Step Guide