This is a guest post by Steacy Easton, a writer featured in Macleans, Pitchfork, Spin, The Atlantic, The Walrus, and a number of other publications. The views expressed in this article do not necessarily represent those of TalkDeath.

I started this draft on Transgender Day of Remembrance, a red letter day in queer communities, where we remember the dead. It has other names-Trans Day of Resistance, or for the Pacific Northwest band, G.L.O.S.S.- Transgender Day of Revenge. There are many ways that trans folks have violence imposed against them. They are killed or forced to kill themselves, they are beaten, and they are murdered, among other acts of physical violence. There are also many unique and lesser known forms of violence against transgender people. The most common is called, in trans communities, deadnaming. Deadnaming is a form of violence against trans folks that not only occurs in life, but also in death.

Deadnaming occurs in a number of forms. It is easily understood as refusing to acknowledge the name a trans person goes by, in favour of the name they were born with. Naming is a form of creation, it is a way of constructing meaning, allowing for a narrative that matches bodies, a way of being whole. To refuse to name someone is to refuse to recognize their autonomy, and to isolate them from the communities in which they are born. For some Trans Exclusionary Radical Feminists, it becomes an act of malicious defining: that one is born a woman in infancy, and any transition, any discovery of proper self, cannot occur. The refusal to name is the refusal to think that the act of creation found in naming has any legitimacy.

To deadname is a unique violation of trans personal autonomy. It is logical that it should be guarded against, and that the trans community would be the people to police it. But, thinking carefully about the recent lessons of the good death movement regarding the re-thinking of norms and removing the taboos around death, I wonder if the taboo around deadnaming reinforces a difficult binary. When one dies, the spirit lasts, not in a ghostly haunting sense, but in the stories we tell about the person, their ideas, the children they have or the ones they help raise, or in their influence on community. Death well integrated into a community allows us to recognize that the Western binary of death versus life is one that is essentially false. The people we love and lose continue to live with us.

I wonder if good death and good transitioning can learn from each other, if good death practices and good deadnaming, can complicate each other fruitfully.
Just as how we traditionally talk about death as a kind of binary, much trans discourse reifies a similar problem. The taboo about deadnaming plays not only into the historical binary- that gender is a problem to be solved, that there are only men and women-  but that it refuses to recognize the wide variety of trans lived experiences. It constructs a ladder of good trans behaviour, where passing or authenticity is the height of validity. The memory of gender becomes a kind of institutionalized forgetting. Yet there are those who are unable to forget, unwilling to forget, or those who do not think of their gender as fitting on an axis of men or women, or those who refuse the narrative-of being a man trapped in a woman’s body. Western funerary practices, which seek to make a natural, complicated and messy life experience into something clean, medicalised, and hermetically sealed, is reflected in how trans lives can come to be constructed as neat binaries.

I wonder if good death and good transitioning can learn from each other, if  good death practices and good deadnaming, can complicate each other fruitfully. There are many ways to physically die–to die in the hospital or to die at home; to concede to death on one own’s terms, to die in community, or to die alone. There are also dozens of ways to transition. There are trans people who do not change their names. There are trans people who choose to have surgery, and those that do not. There are those who tell their deadnames as a shibboleth of intimacy. There are trans folk who never pass, or will never be able to pass. There are trans folk who refuse to seek medical solutions for that which might not be considered a medical problem. There are those who have a spectrum of names- names for family, and names for the public; names for the stage that become names for daily life; nicknames and pet names and ceremonial names. Names that were dead, and are now alive. If we think of deadnames, like this new death positive movement, as part of life, the language can be born again, wilder, and less constrained.

This is all a bit utopian, too interior to recent conversations within the trans community. It might be a proposal to be thought of in the future, and one that must rest on the extension of autonomy for people to choose how they name themselves, recognizing the essential nature of naming on both the creation of self and community. Until those qualities are fulfilled, then deadnames are still violent, are still a refusal of the work that the trans community has done on its own creation. The balance between self imposed change, and refusal to recognize change has a tone of authoritarianism, that we must be careful about. But, it seems possible, like we have an Order of Good Death that is complicating norms, we can have an order of good deadnaming. Perhaps, not even an order of good deadnaming—a disorder of ambiguous naming—sometimes dead, sometimes alive, constantly in cycle. 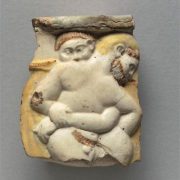 Steacy Easton
Steacy Easton is a writer, and artist from Edmonton, and now living in Hamilton, Ontario. They have shown visual work in New York, Chicago, Hamilton and Toronto, and is in the collection of the library of the National Gallery of Canada. They have written for Macleans, Pitchfork, Spin, The Atlantic, The Walrus, and a number of other publications.