When Virginia Woolf wrote A Room of One’s Own in 1929, she was advocating for women to have a space to write, a space that would allow one’s creative freedom to flourish. In essence, she was also advocating for women to have body autonomy, to have a place to be alone and unseen in the nest of one’s imagination, to curl inward or fill a room with the full embodied presence of one’s artistic capacity.

The decomposition of the physical body after death is, in its own right, deeply personal and creative work. Having a grave of one’s own supports this intrinsic, resourceful, and ingenious process that provides the body with its own creative space and freedom to become soil.

A Grave of One’s Own: The Body Politics of Green Burial

Feminist thought has uncovered in its long history the struggle of women to have power and authority over their own body, for a space to exist without judgment, objectification, or violence, a place where the embodied experience can thrive without fear or limitation. This means having access to reproductive freedom as well as breaking the confines of social norms in relation to sexuality, body modification, fashion, and access to traditionally male spaces, such as Board rooms, leadership seats, and political spheres. As Ruth Bader Ginsburg so famously pronounced, “Women belong in all places where decisions are being made.”

The scholarship of body politics maintains that the human body is a social construction subject to regulation and control based on institutional policies, social standards, and interpersonal dynamics. Central to this work is any physical body that registers as deviant, which includes not only women, but also people of color, transgender individuals, those with disabilities and people who are members of vulnerable and/or marginalized communities. In short, the work of body politics studies power, containment, and domination over the physical form.

As Michel Foucault asserts in Discipline and Punish, “the body is directly involved in a political field; power relations have an immediate hold upon it; they invest it, mark it, train it, torture it, force it to carry out tasks, to perform ceremonies, to emit signs.” The guiding principle behind the scholarship of body politics is to study and strategize how to break free from this oppressive paradigm.

To Have a (Green) Grave of One’s Own

How does this principle apply to the human body when it is no longer alive? To explore that question, I want to return to Virginia Woolf, to the idea of having your own sacred space to do your creative work.

Deathcare practices in the U.S. need to change and the mission of the green burial movement is to do just that.

What does it mean, then, to have a grave of one’s own? For the “green” burial movement, it means being buried in a grave where your body can do its biologically designed creative work of reverting back to soil and returning to the earth without the control, constraints, hazards, and ecological poverty involved in conventional burial. The predominant burial practices in the U.S. are impersonal, unsustainable, expensive, surrounded by a culture of silence, contributors to climate change, and often driven by a corporate monopoly. Deathcare practices in the U.S. need to change and the mission of the green burial movement is to do just that.

In a green burial, a grave of one’s own means rejecting the formaldehyde, glutaraldehyde, methanol humectants, and wetting agents that replace human fluids during the embalming process. It rejects exposing embalmers to chemical carcinogens to accommodate the fear of the physical realities of the dead body. It rejects metal or concrete vaults that form a wall to separate the body from the surrounding soil. It rejects clothing, cloth, and caskets that are not biodegradable, and it rejects conformity.

The intriguing paradox of green burial philosophy is that as the body decomposes, it is being restored. It is renewed, reborn, and reinstated in its former earthen origins to continue its creative work.

Having a grave of one’s own also means having more control over all aspects of your burial. At a natural or conservation green burial ground, this might mean looking out over the expanse of a wide wildflower meadow and allowing your eyes and imagination to scan the landscape until they settle on the place that will mark your final home and resting place. It might mean having certain flowers placed inside or around the grave at the time of burial, and the freedom for friends and family members to dig and close the grave and stay at the graveside as long as they need to process their grief.

It also might mean choosing a burial that is conducted, from start to finish, in a manner that fully supports environmental values. No two green burials are the same. The burial services are family directed, placing the size, duration, rituals, and ceremony in the hands of each unique family rather than a funeral staff. Most importantly, a grave of one’s own supports the most sacred final creative work, the physiological return to the earth without anything harmful standing in the way of the body’s brilliant ability to decompose and become soil.

We often hear about the importance of choice in end-of-life care. While choice is often what spurs social and environmental change from a consumer standpoint, there are limits to positioning green burial as simply an eco-conscious death care option. According to author Suzanne Kelly “the language of choice remains a risky guiding philosophy to bank on for change as it mistakenly places the path to social transformation in the hands of each individual quest.” Kelly also reminds us that “to have a choice at all is often a condition of access and privilege.” The green burial movement grounds itself in a mission much larger than the prospect of choice. It asks us to fully embrace the natural and organic process of returning to the earth as all living things eventually do. It asks us to normalize death and our biological bond with the natural world in a way that is unfettered and unbound by the constraints of conventional burial.

The intriguing paradox of green burial philosophy is that as the body decomposes, it is being restored. It is renewed, reborn, and reinstated in its former earthen origins to continue its creative work.

Whether dead or alive, the human body is still under siege.

In addition to utilizing fewer resources, carcinogens, and pollutants, a body burial in a natural or green burial ground is often more affordable than conventional burial. From an ecological and economic standpoint, it is easy to debunk conventional burial practices. But the larger movement to deny body autonomy is only becoming more amplified on a global scale. Judith Butler in her October 2021 Guardian article “Why is the Idea of ‘Gender’ Provoking Backlash the World Over?” articulates the global scale of the anti-gender movement. According to Butler, “the principle aim of the movement is to reverse progressive legislation won in the last decades by both LGBTQI and feminist movements.” In addition to opposing women having control over their reproductive health and legal protection against gender discrimination, the movement has escalated, as Butler asserts, “during a pandemic time in which domestic abuse has soared and queer and trans kids have been deprived of their spaces for gathering in life-supporting communities.” Whether dead or alive, the human body is still under siege.

What stories do our bodies have to tell?

Natural or green burial is not new. For mainstream white America, it is a return to traditional burial practices that existed before the Civil War. During the Civil War, the bodies of soldiers were embalmed so they could be preserved long enough to be sent home to their grieving families, thus igniting the birth of the funeral industry. But it is important to acknowledge that traditional Jewish and Muslim burial practices are already fundamentally green, and natural burial contradicts the more elaborate burial practices of African American communities. The need for environmentally sustainable body disposition is critical, but how we dispose of the dead has deep cultural roots that illuminate the magnitude of inclusion and social justice in ongoing dialogues about natural death care. All perspectives must be heard.

For me, when I think of Virginia Woolf going to her room and closing the door behind her to write, I imagine her answering her own intrinsic and intelligent call for freedom to allow her creative force to be fully realized, a freedom that was not available to Shakespeare’s sister as Woolf describes in A Room of One’s Own. According to Woolf, “this poet who never wrote a word and was buried at the crossroads still lives.” She still lives in all people who strive for physical and intellectual freedom during life and after death. She still has stories to tell that need an outlet.

After death, what stories do our bodies have to tell? A grave of one’s own is a place where the body is free to slowly weave and unravel into the earth its own magnificent story, a story that will someday become another story and another and another. 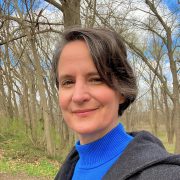 Donelle Dreese
Donelle Dreese is a writer and Professor of English at Northern Kentucky University where she teaches inclusive and environmental literatures, literature & film, American women poets, and a green burial course for the Honors College. Donelle is the author of several poetry collections, including Sophrosyne (Aldrich Press, 2015) and Organelle (Kelsay Books, 2021). Her poetry and essays have appeared in a wide variety of journals and magazines including Potomac Review, Roanoke Review, About Place Journal, and Women in Higher Education. In her free time, Donelle serves as Vice President of Heritage Acres Memorial Sanctuary, Cincinnati's only dedicated natural burial preserve. She is also the photographer and newsletter editor for Heritage Acres.