Today is the anniversary of the death of Saint Patrick. We celebrate his Feast Day, which loosely translates to people drinking (too much) green beer and wearing green clothing, pretending to be stereotypically Irish.

We have briefly written about Irish death rituals in the past. But today we wanted to dig a bit deeper and celebrate this day in proper death positive style.

So pour yourself a drink, and pull up a stool (but not too close) as we share some interesting Funeral Traditions from Ireland.

Funeral Traditions from Ireland: How the Irish Embrace Death

The tradition of holding a wake is one of the most ancient of our death rituals, first being cited in the Homeric war poem The Iliad. In Ireland, the wake tradition is believed to be a mixture of Paganism and Christianity. Up until the 19th century, with the development of modern cities and deathcare, an Irish wake started with women washing the deceased, dressing them in their finest clothing, and placing the body on a large table in the main room of the house with candles placed around it. The body would be wrapped in a shroud, tied and decorated with ribbon or flowers. The wake would last a few days during which the body would never be left alone.

Men would partake in smoking tobacco together to socialize and keep evil spirits away from the body.

Neighbors would visit the home of the deceased, welcomed by relatives, and expressed their sympathy by stating “I’m sorry for your trouble…”. Everyone was encouraged to touch the body, but it was not a solemn occasion.

Stories were shared, and food and drink were consumed liberally. Men would partake in smoking tobacco together to socialize and keep evil spirits away from the body. Each male visitor was expected to take a puff of tobacco from a pipe that was left near, or sometimes on the body.

The Irish Wake today is comparable to other Christian funerals. However, people in Ireland typically believe that a funeral is a cause for a celebration of the life of the deceased. 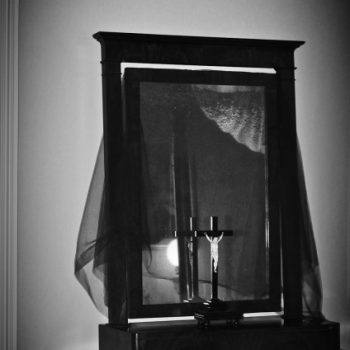 Stopping clocks, opening windows and covering mirrors are all part of the Irish Wake tradition, and similar rituals can be found in other cultures around the world.

All clocks are stopped at the time of death. This marks the time out of respect, and also prevents bad luck.

All the mirrors in the house are covered so the spirit of the deceased is not trapped inside.

All the windows in the house are opened so the spirit of the deceased can leave the home.

But be warned! Don’t stand between the spirit of the dead and the open window, or you will block their exit and be cursed! 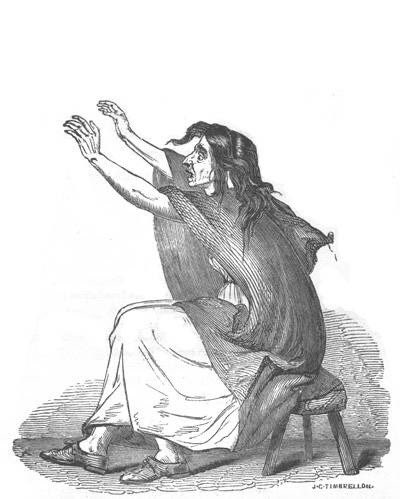 In ancient Ireland, you weren’t supposed to cry until the preparation of the body was complete. Crying or wailing too soon was believed to attract evil spirits that would capture the soul of the deceased.

Once the preparation of the body was completed, a lead keener would begin. She would be the first woman to weep over the dead body and recite poetry. After she began, the other women would join in.

This tradition is rarely practiced at funerals today. 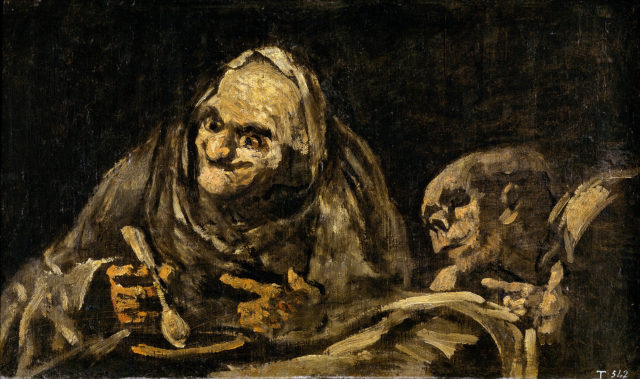 A Sin Eater was a person who was tasked with eating the sins of the dead in order for the soul of the deceased to avoid damnation (fun fact: sin tastes a lot like chicken). In Ireland, the sin eater tradition was practiced up until the late 19th Century.

When a Sin Eater died, his soul would be carried to hell, weighted by the sins he had eaten throughout his life.

It is believed to be a folkloric ritual connected to the British Isles, with roots in early Chrisitanity. When someone died without being able to confess their sins, a Sin Eater would be called upon and given bread and ale that was either passed over the body, or eaten in front of the corpse. They would then say a short prayer and would essentially ‘eat’ the sins of the deceased, absorbing the sins into their own soul. This allowed for the soul of the dead to pass into heaven and rest in peace.

When a Sin Eater died, his soul would be carried to hell, weighted by the sins he had eaten throughout his life. 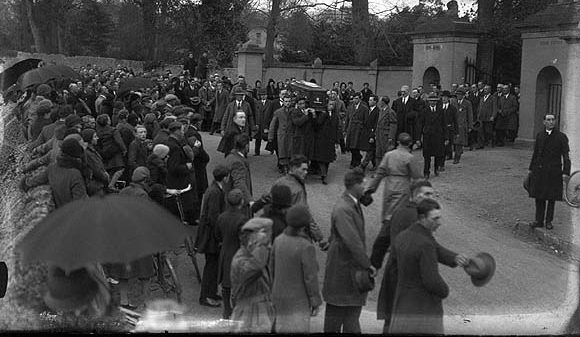 “Funeral of Mrs Pearse” via National Library of Ireland

After the wake is finished, the body is removed from the house and transferred to a local church for the funeral mass and burial. These traditions are quite similar to Christian funeral processions in the West.

The coffin is traditionally carried by 6 male pallbearers, who are often family. The body is either driven in a hearse or carried by the pallbearers at the front of the procession, with friends and family following behind. People in the streets will stop and allow the procession to go ahead of them out of respect.

Once at the church, there is the funeral mass that often lasts for around 45 minutes with the priest and loved ones speaking of the deceased. After this service is complete, the same procession will carry the coffin to the grave to be buried with a final prayer.

If the procession passes the house of the deceased, they will stop for a moment as a sign of respect.

Today, the Irish Wake is still celebrated in many parts of Ireland, though it is less popular in urban areas. It can take place in the home of the deceased, or at another location such as a pub or town hall.

Gone are the days of keening, with most modern wakes only lasting a few hours, or a single day. In some cases, the body may not even be physically present at the Wake, but there will often be photographs of the deceased on display. If the body is present, it is expected people visit with it briefly, say a short prayer or moment of silence, and then carry on.

But don’t be distraught, there is still food, drinks, and stories to be shared abound. The modern Irish wake is still about celebration and embracing our mortality with a bit of humour and good cheer. So if you ever find yourself at an Irish Funeral, do not be shy. Pay your respects to the family and raise a glass to the deceased, and then maybe stay a little while to listen to some good stories. We hope you enjoyed learning more about these fascinating funeral traditions from Ireland. 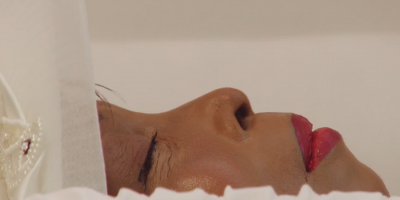 Keepers of Culture: The Sacred History and Art of Caring for Black Deceased Bodies