Between Nirvana GIFs and humorous reblogs, resided a home on my Tumblr blog for tragedy. As a teenage girl who embodied Kurt Cobain, I may have veered into deadly territory: Waifish girls adorned with quotes about death’s sweet release, morbid song lyrics, and anything Sylvia Plath.

My Tumblr home was also sprinkled with suicide awareness posts that came up alongside stories of girls who ended their lives. You would reblog that kind of content if you want to make it known that you’re wiser than the typical sad girl. The (now thankfully deleted) thatnirvanagrrrl was my museum. It allowed me to be the girl aware of the mental health struggles of teens. Yet, did I fall for the trap of idealizing this dark side of the mind?

I looked at the black and white waifs as characters, not humans on the other end of a computer. I imagined their stories in my mind. Maybe she was like Francesca Woodman, photographing herself in a confession of a chaotic mind. She could be a model directed for a photograph. No matter, my depiction of deathly poetry was my awkward self: a girl hidden behind big glasses and bangs, and curves covered up by clothes the size of a suburban home.

Kurt Cobain, River Phoenix, and Ian Curtis all lived cinematic lives in my mind. I would listen to their music and watch their movies, but I often found myself daydreaming about what would happen if I died a legend. I could be the focus of a documentary with loved ones describing my alluring but tragic nature. All of my adolescent struggles could lead to something more important someday.

In the Rookie essay, “The Normalcy Curse”, Emma Straub describes her anger at normalcy when she was young. She details how her sulking brought on by the 90s media’s obsession with grunge moodiness was disrupted by her loving parents who provided her with an upbringing centered on deep concern from parent to child. Straub eventually came to the realization that her thirst for this tortured reality actually negated all she really cared about.

Just as Straub came to value her family, so did I. As my teen years bowed to a close, my cinematic daydreams were abruptly cut. Before I could wallow in devastating stories or quotes to fuel my former sad girl self, life sped ahead. I entered college, dropped out of college, got my associate’s degree, took over care of my grandfather, managed bipolar meds that actually worked. My life circumstances were not ideal, but there was no choice but to persevere.Soon, my family and books came to mean more to me than suicidal ideation.

At twenty-two, I yearned for deeper revelations. I loved the contentment of nothing, but I needed big ideas to keep me active. Those in a similar position as I was in–yearning for depth–often become interested in veganism or social justice. Of all the movements I could sink into, I fell into death positivity. But after all this growth and progress I had made, how could I “regress” back to death?

For The Sad Girls Who Are Death-Positive Curious

To the former Tumblr sad girl, the Death Positive movement may seem like a cruel joke. For someone that has just escaped suicidality, embracing the reality of death could be taken as another form of romanticization. Death positivity does not celebrate death or ending one’s life, like my former Tumblr sad girl would fantasize about.

Death positivity focuses on reducing anxiety and sorrow around death. While many supporters dress in black and love their share of skulls, the emphasis is on supporting and guiding people around all things death and dying. Many at the forefront of the death positive movement emphasize the importance of having conversations about death. For example, how we want our bodies to be cared for after death, how to reduce the fear and stigma of death, and so on.

Understanding these conversations, and the motivations behind them, is crucial. A good rule of thumb I’ve come to understand is tone. Using a casual tone to discuss things like end of life planning helps reduce the stigma around death. If we can discuss death like it’s the weather, then we progress. Nevertheless, going down the rabbit holes of the history, science, and psychology of death and dying can empower society to lessen chaotic worries.

It is fascinating to read up on what happens to our bodies after we die. It is valuable to ease into the inevitable. But death is not glory or roses. We only cause ourselves mental distress by reframing death to benefit harmful ideas. While we all die, death positivity provides a sense of reason against all the sad noise online.

Being death positive means we have the resources to dive into the rocky terrain of life.

The internet always finds its loopholes. Some of the romanticized suicidal content still exists, but Tumblr tries to limit it by blocking the content and adding resources to help those in need. A Tumblr search for “death positive” leads to content about breaking the stigma around death, memes about decomposition, and comics on making peace with death. This reassured me that I do not need to jump through hoops of overly-romanticized content to get to reasonable death positive content.

I’m not a sad girl or a happy girl. If I require any unifying identity, maybe I’m a thoughtful girl? I hope I pass some of these former black and white waifs on Instagram, unaware that they are the granola girls now getting fresh air. Perhaps the girls who reblogged them have grown to show their faces in photo dumps, okay with life’s mundane qualities. Being death positive means we have the resources to dive into the rocky terrain of life. 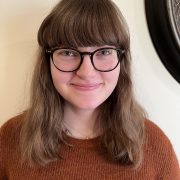 Gabrielle Lynch
Gabrielle Lynch is a writer based in Illinois. Her work focuses on mental health, pop culture, and family. Much of her work has a personal lean. She has written for 14 East Magazine, and her personal essay on her autism experience won a League for Innovation in the Community College award. You can find her at gabriellelynch.squarespace.com.