Because of their macabre sense of humor and increased reflections on death,  Gen Z is sometimes thought of as the most jaded generation. I used to think that this claim was an overstatement. After all, every generation has its own reasonable cause of dread regarding death. If you were a bar maiden in the 1300s during the black plague, or if you were one of those anemic Victorian boys in the age of tuberculosis, you may have had some genuine concerns regarding your (lack of) longevity.

After some deep reflection, and a comprehensive survey, I want to argue that my generation (Gen Z) has a very nuanced and novel relationship with death that delineates from their predecessors. Death, rather than some mystical and fearful phenomena, is more akin to a weighted blanket, offering solace to this generation of disenfranchised youth. My survey suggests that the increased openness of Gen Z to the topic of death and dying may be related to chronic stress imposed by a hyper-connected world.

In March of 2021, I recruited 90 diverse Canadians belonging to Gen Z (born 1997-2012) and had them complete an anonymous survey regarding their own views and relationship with death and dying. My survey had a twofold result: first, it caused existential dread in many of my peers (my apologies), and second, it revealed the unique relationship that my generation has with death. I developed this survey with a preconceived idea of what I expected to see based on my own experiences (and time on TikTok), but the results were often unpredictable.

Sociologists Glaser and Anselm suggest that the archetypal contemporary way of handling death is through a “closed awareness context,” which is our need to push death away from ourselves through denial and silence. Gen Z, however, places death at the forefront of their lives in many ways.

A recent VICE article suggests that Gen Z approaches death with far greater maturity than any of its predecessors. Baby Boomers have a ‘stay calm and carry on’ upper lip relationship to mortality, and at the beginning of the pandemic, polls showed that millennials are more likely to be afraid of death. VICE suggests that Gen Z are more likely to partake in avid discussions surrounding death and dying than any other generation. With the increased presence of social media in the lives of our generation, this makes sense. No longer is death-related discussion relegated to parlour rooms or funerals. Rather, death is ubiquitous.

With the increased accessibility of death through every social media site, it is not hard to imagine why death is a constant thought among Gen Z.

Over 80% of participants in my survey regularly consumed media featuring overt themes associated with death and dying (video games, movies, music). In a 2020 paper, Jacobsen and Petersen reveal that the pandemic further instilled death and death-anxiety into mainstream life. They compare the effect of COVID to a similar experience that happened around World War I where the bulwark that humanity steadily crafted against death was slowly dissolved as death was rapidly introduced into people’s lives. While Jacobsen and Peterson argue that contemporary Western society is wholly unprepared to face this scale of interaction with death, I would argue that Gen Z has been primed for such an occasion. Social media places tragedy at our fingertips and that tragedy is almost impossible to escape. Previous generations tuned into the daily news or depended on word of mouth to have access to very compartmentalized information. From school shootings to rising suicide rates, social media news feeds are flooded with stories of tragedy.

The Werther effect, the mimicry of suicide after a highly publicized suicide or tragic event, sheds some light on the connection between social media and death. For example, there is a noted increase in suicide rates following media reports of mass death, and I suspect that this is especially relevant to Gen Z’s mental health. Increased exposure to death causes an increase in death-related thinking, which can be both positive and negative. With the increased accessibility of death through every social media site, it is not hard to imagine why death is a constant thought among Gen Z.

It is no secret that there is a mental health crisis ravaging today’s youth. Some surveys report that half of Millennials and almost 75% of Gen Z report feelings of anxiety and depression. My own survey found that 54% of respondents experienced depression in conjunction with the pandemic and over 70% claimed increased feelings of anxiety exacerbated by the pandemic. Gen Z is no stranger to the destructive forces of mental illness and have seen the unfortunate effects of this firsthand. Poor mental health offers more susceptibility to thoughts surrounding death and dying. Gen Z has been grappling with thoughts of death for a long time and the pandemic has only exacerbated systemic issues that contribute to negative feelings.

One individual in my survey claimed to be waiting for the ‘sweet release of death’. Another wrote that “life sucks so much right now, I doubt death can be worse.” Overall, there was a shared sentiment that the combination of mental health issues, health disparities, ongoing social justice issues, and the pandemic, make life unappealing and in that same vein make death more appealing.

For many Gen Z, death is intimately connected to social justice issues. Many respondents in my survey mentioned the role of privilege and power surrounding the circumstances of one’s death, especially the ability to have a “good” death. Death is a constant reminder of the change that needs to be implemented and Gen Z is rallying and mobilizing to ensure they have a legacy to pass on. The summer 2021 protests over the death of George Floyd further prove this point. Many survey respondents suggested that the death of George Floyd was a rallying cry for them.

Many of my Gen Z colleagues felt that their Gen X or Baby Boomer parents were ill-equipped to discuss death, their own or that of others.

The legacy that many of my Gen Z respondents wish to have is one that ensures that even in death, there remains equality and dignity. The whispers of a bad death are omnipresent, especially because of social media. One individual wrote that “life is so fragile, a man in a blue uniform has too much power and can take a life in a split second.” It is not so much death that causes feelings of despair, but the lasting societal scar that this violence perpetuates does.

Paradoxically, more than 80% of respondents claimed to approach death and dying with humor. While my survey reports a general lack of fear surrounding death, some individuals stated they saw humour as a coping mechanism for the heaviness of the topic. It is easier to come to terms with things we cannot control if we can at least control the sentiment surrounding it. Is death joked about only to make it less scary? Many of my Gen Z colleagues felt that their Gen X or Baby Boomer parents were ill-equipped to discuss death, their own or that of others. Some of my respondents suggested that humor allowed them to start the conversation with older generations.

This raises a few pertinent questions. Was death and dying discussed in a sustainable way through education in individual’s formative years? Has society allowed for Gen Z to have space to create healthy conversations around mortality? Based on the education I have undergone, there seems to be a lull in discussions regarding death or an avoidance of the topic altogether. Death is akin to discussing religion and politics or asking your aunt her age. And so, while my survey found that Gen Z are talking about death, 75% claim that they would not be satisfied if they were to die tomorrow and 70% have never discussed their final wishes with anyone. Moving forward, death and death-related practices need to be made more accessible in education.

…the proverbial curtain has been pulled and Gen Z does not view the world with rose tinted glasses.

Some of my survey respondents suggested they had an active and thoughtful relationship with death while others said they had never even thought about the concept before this survey. One respondent mentioned that I ruined his morning by making him contemplate these ideas for the first time, and at such an unholy hour (it was 2 pm). Generation Z is not a monolith and that is clear from the results of this survey. But something that can be agreed on is that as a generation, we really do not know what the future holds for us. This is only exacerbated by the general state of uncertainty perpetuated by the current pandemic. This generation has been living on the edge of a precipice, unsure of where to go next.

So, how do Gen Z’s experiences and attitudes surrounding death diverge from previous generations? I would say that the increased accessibility through social media has made the topic of death much more mainstream, for better and for worse. In previous generations, national narratives like the American Dream helped counteract any dissonance and offered a vision of a brighter future ahead. But unfortunately, the proverbial curtain has been pulled and Gen Z does not view the world with rose tinted glasses, nor can it afford to push death away like previous generations have.

This generation has seen the accumulated effects of the stock market crash, institutional racism, climate change, and the ravages of a pandemic, so it is hard to place any onus of burden on them for a macabre approach to life. Viktor Frankl stated that everything can be taken from a person but one thing: to choose one’s attitude in any given set of circumstances. I would argue we are seeing a new form of postmodern existential dread, except this generation is embracing it and making it their own. 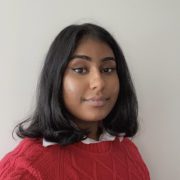 Rhea Varghese
Rhea is a student in the faculty of health sciences at McMaster University. Her interests lie in the social construction of health and disease and understanding beliefs surrounding these processes was a catalyst for exploring topics surrounding death positivity. Rhea also has a sustained interest in maximizing health outcomes specifically in the field of transplantation where her research interests lie.