The following is a guest post by Dana Rutherford on behalf of Break the Silence Against Domestic Violence.

As a woman, we are taught from a young age about safety. We hear so many words of advice such as never walk in dark areas alone. We are told to be observant, lock our cars, and never let our guards down. We fear immediately what could happen if that “monster” lurking in the shadows gets us. Our minds go to the worst possible scenario: death.

But what if I told you that half the women victims of murder were killed by their intimate partner (NCADV, 2020)? What if that monster lives in your home?

This is the daily fear of domestic violence victims, and death can come in multiple ways.

Fearing Death of Self

It is a cruel reality when the person who you run to for love, admiration, and comfort is also the person who is bringing you intense pain. Domestic violence is a layered cycle that leaves victims imprisoned in their relationships. One may question why someone would choose to stay with someone in these circumstances; however, it’s much more common than one would expect. One in three women will experience intimate partner violence in their lifetime (WHO, 2021). Also, victims are trapped due to situations such as finances, children with the abuser, lack of resources or support, religious beliefs, immigration status, and/or fear of what could happen if they escape. Statistically, the most dangerous time for a victim is right after they leave the relationship (Respond, 2016).

…one in two murders of women is perpetrated by intimate partners, not the scary man in the alley we learn about as little girls.

Women are drastically more likely to be abused than men, and death from abuse is a major concern for these women. In my case, I had my head pounded into the wall, was almost pushed down the stairs, and took many blows to the base of my neck, among other violent incidences. I didn’t necessarily believe he would plot my death, but I certainly feared it could happen accidentally. The numbers show that my worries were very much a sad reality for many female murder victims.

The Pennsylvania Coalition Against Domestic Violence (PCADV) publishes its Domestic Violence Fatality Report every year. Of the fifty-eight women murdered in domestic violence-related cases in 2020, forty-nine of the deaths were at the hands of intimate partners (PCADV, 2020). When firearms are accessible to perpetrators, the probability of a victim being murdered is five times more likely, forty-one times the risk when the firearm is used (NCADV, 2020). As stated before, one in two murders of women is perpetrated by intimate partners, not the scary man in the alley we learn about as little girls.

Many victims of domestic violence stay because of the children concerned. Fear of custody battles and not being able to protect their children from their partner often lead mothers to take the abuse, developing a martyr mindset. With that being said, death is also a reality when children are present in abuse in multiple ways.

Statistically, the mortality and morbidity rates of infants and children increase with the presence of domestic violence in their homes (WHO, 2021). Studies indicate that low infant birth rates, maternal infections, inadequate prenatal care, and anemia are common with pregnant women who are living in abusive situations (Huth et al., 2002). When it comes to family murder-suicides (where the vast majority of offenders are male), one study showed that seventy percent of the cases had a previous history of domestic violence (Auchter, 2010).

The death of children involved can happen in the womb as well, leading many mothers to endure grieving their loss while still enduring the abuse. Research in Turkey showed that pregnant women who were victims of physical violence were two and a half times more likely to experience a miscarriage (Nur, 2014). Other studies suggested miscarriage was four times more likely in these conditions (Hedin & Janson, 2000). Evidence shows that a staggering twenty percent of women experience physical violence in their pregnancy, and of those, physical abuse happens more frequently throughout the pregnancy, increasing as time goes on (Huth et al., 2002).

Miscarriage due to physical abuse is every mother’s worst nightmare. Left to grieve with little to no support, mothers deal with an immense amount of guilt that they “failed to protect” their babies. Many blame themselves, even when ultimately, it’s the fault of the abuser. Several fail to report the murders and are left to suffer in silence. It can also lead to further complications when attempting to have future pregnancies. It’s a very lonely state to be in, all while enduring abuse at the same time.

Fear of Death by Suicide or Substances

I can remember many nights feeling like death could be my only release from the trauma I was enduring. I wondered often how I would do it, but then, I thought of my children. I couldn’t bear to leave this earth knowing the devastation they would feel losing their mother and being left with their abusive father. I was far from an alcoholic, but I often self-medicated with a drink or two. It temporarily was an escape from the life I was living.

Research has revealed that every year in the United States, approximately six thousand women commit suicide, and of those six thousand, a large population of them do so because of intimate partner violence from a male perpetrator (Websdale, 2003). Mental health conditions are very prevalent in victims of domestic violence, such as post-traumatic stress disorder (PTSD), anxiety, depression, and panic disorders. Statistics show that as domestic violence decreases so does depression in women; however, sixty-six percent of those women will continue to have symptoms of PTSD, even multiple years after the relationship ends, proving that trauma affects these victims mentally long-term. (Rose et al., 2010).

Substance abuse is another issue for many women enduring domestic violence. It can be a coping mechanism that helps alleviate the pain momentarily, but for many, it can come at a cost. The World Health Organization (2021) stated that studies in 2013 indicated that women in domestic violence situations were twice as often to have problems with alcohol abuse. Another study in Iowa revealed that women obtaining services for domestic violence in 2001 were five times more likely to abuse drugs and alcohol (Bennett & O’Brien, 2007). Hospital visits and overdose rates are also higher among victims of intimate partner violence (El-Bassel et al., 2019).  Death from substance abuse is often an accident, but some women use it to voluntarily end their lives. Either way, it’s a devastating end for the victim.

How to Get Help

If you believe you are a victim of domestic violence, you must seek help before it’s too late. You can contact us at Break the Silence Against Domestic Violence through our webpage or social media accounts. You can also reach out to local agencies or the National Domestic Violence Hotline at 1-800-799-SAFE. These advocates can help you come up with a safety plan, find local resources, and get the assistance you need.

Death was not my outcome, and it doesn’t have to be yours as well.

It is also important to reach out to family and friends. You must break the silence to live the life that you deserve. It took me doing the same to realize that many of my loved ones were happy to either give us money, supplies, or a place to stay once they knew of my circumstances that I had hidden for so long. There’s no shame in asking for help.

Fear of death is a very real emotion, but it’s much more hurtful when fear of death by someone you love is your reality. I have been in those shoes and have successfully left my abusive marriage. I am now thriving, no longer in fear, remarried in a healthy relationship, and a part of an organization that aids victims and survivors just like me. Death was not my outcome, and it doesn’t have to be yours as well. 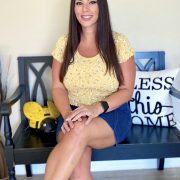 Dana Rutherford
Dana Rutherford is a blogger for the nonprofit organization Break the Silence Against Domestic Violence and a survivor of domestic violence. She is currently in her senior year at the University of Florida and will soon have her Bachelor’s Degree in Sociology. She is a wife, mother, and stepmother, as well as an advocate for domestic violence and mental health.

Sending Text Messages from the Afterlife

How to Hold a Hybrid Memorial Service, a Step-by-Step Guide